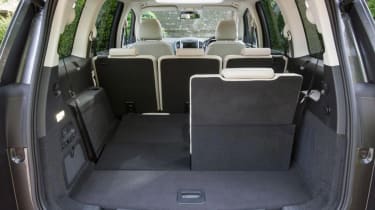 With its higher price tag, blunter handling and boxier styling, practicality is the only real reason customers will choose the Galaxy over the marginally smaller Ford S-MAX – even though both are seven-seaters. Luckily, the Galaxy delivers big time with an enormous boot, an interior littered with clever cubby holes and a hugely versatile seating layout.

Other handy features include cupholders for the third row, a three-point plug in the second row and a deep storage bin under the front armrest. You sit high, with a big windscreen and a good view of the road, while standard front and rear parking sensors make low-speed manoeuvring that bit easier.

The Galaxy has one of the most spacious and practical interiors of any MPV on sale. Whereas the smaller Ford S-MAX’s rearmost seats are really only for children, the Galaxy has just about enough space for two adults back there. The second row slides back and forth individually, too, if you need more legroom. 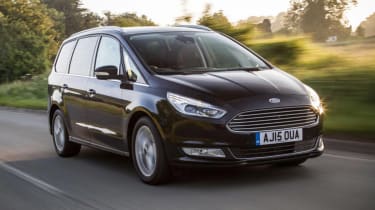 The seating system itself is simple to use. Folding all the seats flat couldn’t be easier – the third row folds down and back up electrically via a button mounted in the boot, while the second row (made up of three individual seats) flops forward by pressing another series of buttons in the boot, although you have to lift them up again manually. In addition, each of the individual middle row seats has Isofix child seat mounts.

A powered tailgate is available as an option – a good idea given the sheer size of the door – and it opens to reveal an enormous boot. There’s 300 litres with all seven seats in place, 1,301 litres with the third row folded down and 2,339 litres with just the front two seats in place – that’s compared to 285/965/2,020 litres respectively in the S-MAX. 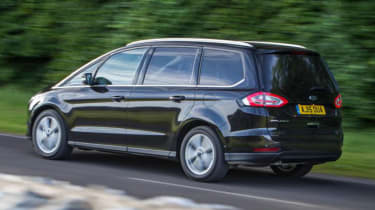 The Ford Galaxy is par for the course when it comes to towing. The maximum braked towing capacity is split up as follows: petrol-engined models can handle 1,800kg and diesels stretch to 2,000kg.