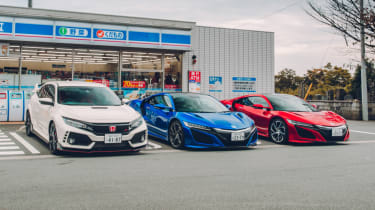 There’s a typhoon in Japan and we’re in the middle of it, or at least that’s what we’ve been told. Persistent rain, unrelenting winds and chaos on the streets of Tokyo are what the news is reporting, but peering over the steering wheel of our Honda NSX and beyond the obnoxious wing of the Civic Type R in front, all I can see are blue skies and traffic – lots of traffic.

We’ve rolled out of Honda’s global HQ and straight into a gridlocked Tokyo. Even in a city as vibrant and hectic as this, the sight of Honda’s two most iconic models in convoy immediately prompts that 21st century impulse: people reaching for smartphones.

These cars have real celebrity status in Japan, and almost 40 years of history between them. Another national icon and landmark of the country is Mount Fuji, and that’s where we’re heading to bring together three of the country’s national treasures. 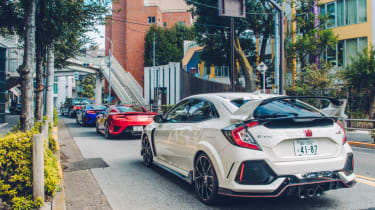 While the Type R and NSX have their roots in Japan, the latest versions have a more global footprint. The NSX, for example, has the curves of a Japanese supercar, but Honda builds it at its US facility in Ohio.

About halfway between Tokyo and Ohio is where you’ll find the new Civic Type R being put together; at Honda’s facility in Swindon. Yet on the streets of Tokyo they appear to be as popular as they’ve ever been, with their unapologetic Japanese styling cutting a fantastic shape against the chaotic city backdrop.

Eventually, the traffic recedes and the NSX begins to silently whirr its way around Tokyo in pure electric mode with the Type R in tow. There are three electric motors in the NSX, but you can only cover around two miles before the 3.5-litre V6 engine kicks in; although such is the limited progress you make around Tokyo, you can go lengthy periods in the serenity of EV mode. It makes this aggressive and angry-looking supercar feel quite tame. 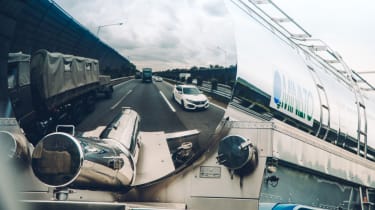 A few hours later, we hit the expressway. There are about 60 miles to cover before we reach our turn-off for the city of Gotemba, the gateway to Mount Fuji. Even in the 581bhp hybrid NSX, it’s a comfortable journey; the nine-speed auto keeps the engine hushed, while the adaptive dampers take the sharpness out of the ride.

We reach Gotemba before long, several Yen lighter, thanks to Japan’s pricey toll roads. In between the rolling clouds, Mount Fuji pokes through, giving the city at its doorstep a toytown appearance. It stands at 3,776 metres tall, but the highest point you can get to by car is 2,400m. It’s only accessible by one road, the Fujisan Skyline: eight miles of velvet-smooth, snaking tarmac that is only open between spring and summer. Fortunately for us, the threat of Typhoon Lan appears to have kept the rest of Japan indoors. 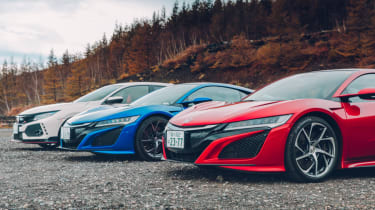 We pull over and I jump into the Type R, and it instantly feels familiar: the design, infotainment system and build quality are almost identical to that of the NSX. Given the £100,000 gulf in price, it feels like you’re getting a bit short-changed in the supercar.

The Fujisan Skyline is the sort of road that the Type R was built for. Immediately the road begins to climb, with tight hairpins intertwined with fast left-right chicanes. The Civic serves up huge grip from its front end and the combination of 316bhp and limited-slip differential slingshots you around every corner with ferocity. Select the most aggressive R+ setting, and the Type R comes alive, with instant throttle response and crisp steering.

Climbing back into the NSX, it feels a lot wider and more intimidating on tighter stretches of the road; there’s no shortage of power thanks its 581bhp powertrain, and the assistance of the electric motor means throttle response is instant. It has the legs over the Type R on the straights, but even with its power advantage and reassuring four-wheel-drive set-up, the Civic makes better use of its power in bends: it’s the faster and more effective tool for the job. 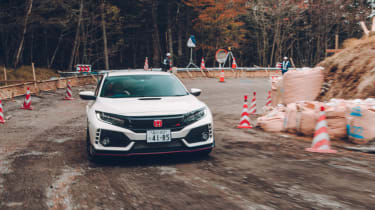 Then Typhoon Lan – or rather, its aftermath – slows our progress, as roadworks are under way on a damaged section. We tiptoe our way through, and before long reach the top of the Fujisan Skyline, where the temperature is around zero. From here the only way to the top of Mount Fuji is a six-hour hike. But even from this far off the peak, peering out of the NSX, it makes for a prettier view than the Type R’s wing.