"Honda doesn't have a class topper - could its new range change that?"

A Japanese sleeping giant is about to wake from its slumber, says Auto Express editor-in-chief Steve Fowler 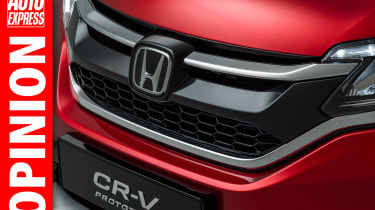 Of all the car makers at this week’s Paris Motor Show, there’s one that’s going to be unusually busy – Honda.

After what seems like years of inactivity, the Japanese giant (and British manufacturer) is going at it hammer and tongs with two all-new models previewed at Paris by the HR-V and Jazz, facelifts for the Civic and CR-V ranges, and the long awaited new Honda Civic Type R.

Most of that stuff will turn up next year, just as the brand makes its return to Formula One race tracks with McLaren. And there’s also the matter of the new NSX that’s on the horizon.

It’s been a tough 2014 so far for Honda – 500 jobs have gone at its Swindon plant (which is running at roughly half its capacity), while the company is one of only a few brands posting a drop in sales year-on-year in what’s still a booming new car market.

Yet in spite of the lack of new models for them to sell, Honda’s dealers continue to impress. Second place in our Driver Power dealer survey is an incredible result, but the challenge will always be to keep up the standard of service that so impresses owners once things start to get busier.

As for the product, Honda hasn’t had a class topper for a while, so can we hold out much hope for the new crop of cars? It has always been a company with engineering at its heart – great news for the new Type R, which has the specs to get us salivating before we’ve even driven it.

That engineering excellence also means strong eco credentials, but there are areas where Honda has fallen behind the times – notably in-car tech and interior quality. Up the game there and things will get very exciting. I hope it gets it right – it’ll be great to have Honda back on song (and winning in Formula One) in 2015.