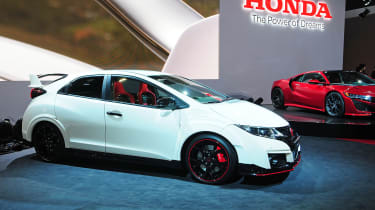 After months of teaser images, prototypes and heavily disguised spy shots, the production-ready Honda Civic Type R has landed at the Geneva Motor Show. Dubbed a “race car for the road”, the newcomer is primed to take on Ford's new Focus RS, also debuting at the show.

Honda has announced that its hot Civic will be priced from £29,995 with the GT version adding £2,300 to that figure. The Japanese brand also revealed that new mega hatch has set a scorching time around the Nurburgring Nordschelife with a lap of 7 minutes 50.63s in close to production spec guise. Honda has also hinted that a lightweight track-focused version of the Civic Type R could be on the way, scroll down the page for more.

The new Civic Type R features a 2.0-litre turbocharged VTEC petrol engine, producing 306bhp and 400Nm of torque. The engine red lines at 7,000rpm, and delivers peak torque from as little as 2,500rpm. 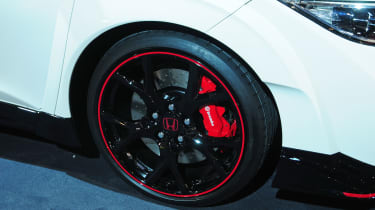 This will help propel the hot hatch from 0-62mph in only 5.7 seconds, and on to a top speed of 167mph. All cars will use a six-speed manual gearbox, with power routed through the front wheels, unlike the all-wheel drive Focus RS.

In an attempt to rein in all 306bhp, Honda has installed new adaptive dampers, while the dual-axis strut front suspension system is claimed to reduce torque steer by 50 per cent compared to the standard Civic. The R will also get electric – rather than hydraulic – power-steering.

Owners will be able to choose between driving modes, including +R, which heightens engine and throttle responsiveness, reduces electric power-steering assistance and firms up the damping for tighter body control. 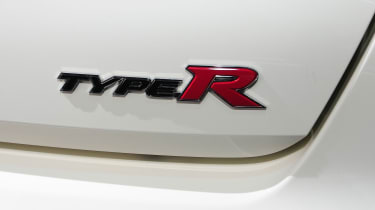 Styling wise, the Championship White Type R on display in Geneva is as imposing and dramatic as we were hoping for. As with the pair of concepts shown last year, this production-ready car gets the same sculpted front end and aggressive stance, as well as a huge rear wing and quad exhausts.

Honda says all these features serve a functional purpose, making the car more aerodynamic, with immense high-speed stability. The new Civic Type R gets a completely flat underside that works with therear diffusers to optimise downforce. The rear wing has been precision engineered for the same reason, but with its angle, height and shape carefully calculated to limit drag at higher speeds. 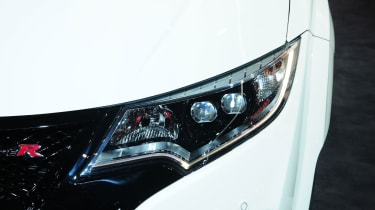 The wide front splitter and deep side skirts also manage airflow, while reducing lift, and the front bumper is sculpted to prevent turbulence around the front wheels – making the car more stable as a result. Elsewhere, the gaping vents send air to the turbocharged engine, with separate holes above the wheels and behind the arches designed to channel air and improve cooling.

Completing the look is a set of 19-inch alloys, shod in 235/35 rubber specifically developed for the Type R. All cars also get a Brembo brake package, with four-piston calipers applying stopping power to 350mm drilled discs. 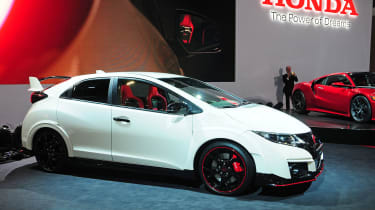 At launch, a luxurious GT pack will also be offered. It adds red highlights to the outside, plus parking sensors, auto lights and wipers, and electrically folding door mirrors. Inside, there’s an integrated Garmin sat-nav and a premium eight-speaker stereo.

Prices and exact specifications will be announced closer to the on-sale date this summer, but we’d expect the Type R to cost around £30,000 to keep it in line with the Focus RS, and ahead of less powerful rivals such as the Seat Leon Cupra 280.

Yagi-san, project lead for the new Honda Civic Type R, has hinted that a faster and more focused model could be on the way.

Honda announced it had broken the Renault Megane 275 Trophy-R’s 7:54.36 front-wheel-drive Nurburgring lap time. The new Honda Civic Type R – which goes on sale later this year – posted a 7:50.63, beating the Renault by over three seconds.

In an interview with Auto Express at the Geneva Motor Show, Yagi-san confirmed that should another manufacturer go on and trump the Civic’s time, the company had tricks up its sleeve to counter.

“The Nurburgring is a very representative track. In order to be the fastest front-wheel-driven car in the world, it was essential to also have and break the lap record on the Nurburgring. It was one of the key requirements of the concept. 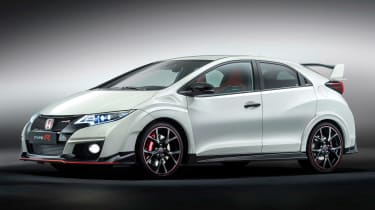 “Of course, if that record is going to be broken one day, that would be the starting line again for a new challenge from our side – in order to gain back the attribute of being the fastest front-wheel-driven car on the Nurburgring.”

As a result, he agreed there was definite potential for a stripped-out, lightweight, track-ready version, with more power and grippier tyres.

“The Civic Type R shown today has all the standard equipment including safety features and security systems. If we talk about a further specialised car, we’ll really be focusing on track usage, with lightweight and more. Increasing the power to weight ratio will be necessary and we believe there is still quite some room for improvement in that direction.” 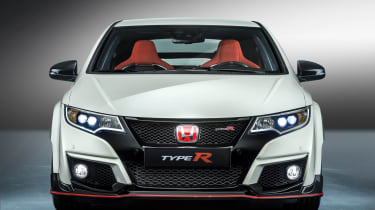 Like the Renault Megane Trophy R, the faster Type R is likely to scrap things like rear seats, air-conditioning and a radio, in favour of a higher-output engine, a scaled-back interior and a rigidity-improving roll cage. Exact details may not be revealed until a later date – or indeed until Honda’s 7 min 50 second Nurburgring lap time is broken.

The 2015 Honda Civic Type R has set a new benchmark for front-wheel performance hatchbacks on the fearsome Nürburgring Nordschleife. Honda announced that a development car did a 7-minute 50.63-second lap time of the legendary 12.9-mile circuit back in May 2015, and you can see it in the video above.

The Civic Type R that completed the lap wasn't in production guise though. The engine, suspension, drivetrain, exhaust, brakes, wheels, tyres and aerodynamic package were standard but air conditioning, the front passenger seat and audio equipment were removed to offset the weight of a full roll cage.

Honda now hopes to follow up the achievement by laping the 'ring in a full production version of the Civic Type R later this year with the aim of setting a new official lap record for front-wheel-drive production cars.

The first sighting of the Honda Civic Type-R concept came at the 2013 Geneva Motor Show. It looks more like a WTCC racer without the stickers and roll cage than a road car. And according to senior project designer Masaru Hasegawa, that's exactly what Honda intended.

“The current Civic line-up isn’t very exciting, so we needed to come up with something for European Honda fans that also fits our performance heritage,” he told Auto Express. “Now, the Type R is aimed at the VW Golf R and Ford Focus RS. Those cars are subtle and more sophisticated-looking. But we wanted ours to be different and distinctive.”

How do you think the new Honda Civic Type R will rank compared to the best hot hatchbacks currently on sale? Let us know in the comments section below...

Welcome to our Geneva Motor Show hub page, scroll down for all our Geneva content...
Honda Civic review