Can Honda Civic Sport - new for 2015 - inject some life into hatchback line-up? 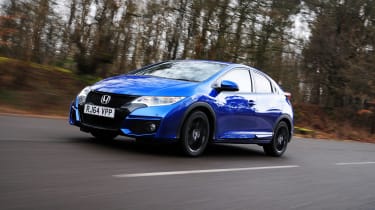 Light updates last year saw minor improvements under the skin, but this 2015 refresh is largely concerned with the way the Civic looks. While this Sport specification does nothing to enhance the Civic’s performance or handling, it does a good job of injecting some much-needed style into the family hatchback range. It’s reasonably priced, and mated to the punchy 1.6-litre diesel engine, so remains a solid choice for a family runaround.

The current-generation Honda Civic has been on sale since 2011, and almost four years after launch, the Japanese brand has seen fit to inject some life into its Ford Focus-rivalling family hatch.

While last year saw a handful of changes under the skin – such as new suspension and uprated power steering – the 2015 tweaks are largely concerned with how the car looks. There’s an all-new Civic Sport spec, tested here, as well as other aesthetic alterations across the rest of the hatchback and Tourer estate range, too.

Styling improvements include new headlamps with integrated LED daytime running lights, and a reshaped front bumper. The hatchback also gets new side skirts and an updated rear bumper, as well as LED tail lights. 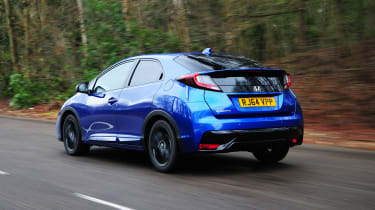 The awkwardly placed boot spoiler remains – although it’s now finished in a classier piano black or body-coloured on the Sport model driven here – meaning rear visibility is just as compromised as before. However, all cars now come with a reversing camera, which does go some way to help parking in tight spaces.

Our mid-range Sport spec test car slots in between SE and SR trims, with prices starting from £19,615 for the 1.8-litre petrol manual. The idea behind the new trim is to offer buyers the Type R image but without the sky-high running costs – adding gloss black 17-inch alloy wheels, the colour-coded rear spoiler and new lower mesh grille on the front.

The changes are all aesthetic, so it gets the same steering, chassis and suspension as other models in the range – but that’s no bad thing. While it isn’t the sharpest handling car in its class – look to the Ford Focus for that – everything feels well weighted, and body roll is well contained. 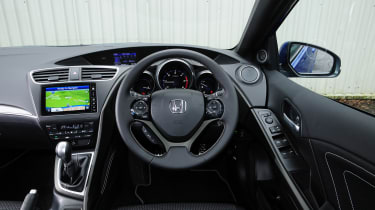 The 1.6-litre diesel engine feels nippy, though despite 300Nm of torque, acceleration from low revs shows it to be a little sluggish. At higher speeds it’s nicely refined, and there’s plenty of punch if you put your foot down on the motorway. Ride comfort is pretty good too, with all 2015 Civics fitted with lightly adapted suspension to help iron out smaller bumps around town. Larger ruts are still an issue, and there are only compounded by the Sport’s 17-inch wheels and low-profile tyres.

Elsewhere, the six-speed manual gearbox feels smooth and precise. The well-weighted action, which mated to a light clutch makes the Civic a doddle to drive both in and out of town. Unfortunately, the upright and elevated driving position isn’t quite as satisfying, and takes some getting used to. Updates continue inside, with new chrome door handles, door trims, seat fabrics and a metallic black fascia on the central control panel being added. 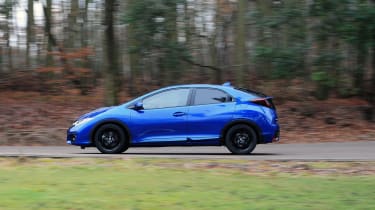 However, the biggest change and most welcome change is the new Android infotainment system, which is far more intuitive and response than the old system. It cleans up the dash and employs the familiar MirrorLink setup, allowing users to stream the contents of their smartphone onto the car’s seven-inch touchscreen. Our test car was the slightly more expensive Sport Navi model, which comes with an integrated Garmin sat-nav system and is well worth the £610 premium.

Practicality remains a strong point, with a generous 477-litre boot rising to 1,210 litres with the rear seats folded flat. That first figure is some 97 litres bigger than a Volkswagen Golf, but the sloped roofline means the Golf trumps is for outright carrying capacity by 60 litres. The same is true of space in the rear seats. Both the Nissan Pulsar and SEAT Leon are better for back-seat passengers.

However, all things considered, the fact the Sport’s tweaks don’t compromise its on-road comfort – yet significantly enhance the way the car looks – makes it a worthy addition to the range. It’s decent value compared to the more expensive Civic SR, and you’ll have to pay north of £24,000 for a similarly-styled Volkswagen Golf R-Line.