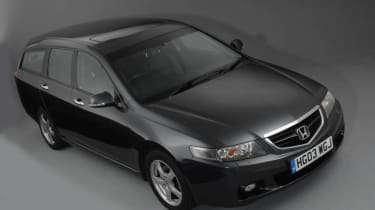 Honda buyers have taken reliability and build quality for granted for years. But when the Accord Tourer arrived four years ago, it brought a winning blend of style and practicality to the mix.

Bigger and more upmarket than its predecessor, the model finally gave prestige competitors from Audi and Mercedes a run for their money.

Sadly, all this came at a price, so used examples are more expensive than rivals from Ford or Vauxhall. But that doesn’t make the Tourer poor value, and it’s a superb buy.

History The seventh-generation Accord arrived in UK showrooms at the end of 2002 as a four-door saloon – with a choice of 2.0 or 2.4-litre petrol engines.

In March 2003, the load-lugging Tourer arrived, and became the first car to use Honda’s in-house 2.2-litre diesel engine. Apart from a face­lift in December 2005, there’s been little change to this winning formula.

The update included a new front bumper and grille, plus a revised facia and steering wheel. It also coincided with the introduction of a fresh range-topping trim specification, the EX, which includes advanced features such as Adaptive Cruise Control and Lane Keep Assist System.

How much? Early, high-mileage Tourers can cost as little as £5,000, but they’re very rare at this price and will have done around 100,000 miles. You’ll need a budget of £8,000 to have a decent choice of cars with average mileage, and autos typically cost between £200-£400 more than manuals.

Facelifted Accords start from 55-plate onwards and the cheapest cars are petrol powered. A 2.0-litre VTEC SE is likely to cost around £11,000, but the equivalent diesel is £2,000 more. Late used models with a high spec cost up to £24,000 – but for that, you could also buy a pre-registered example, with no more than delivery mileage.

Running costs All Accords need attention every 12 months or 12,500 miles. However, diesel models are generally pricier to maintain, except for the 75,000-mile service – when only the petrol version needs an expensive cambelt change.

Services are typically around £200 for the first, third and fifth, £300 for the second and fourth, and £400 for the 75,000-miler. There is also a coolant swap every 120,000 miles or 10 years (£50), and it’s recommended that the air-con is recharged every four years, which will be around £75. The brake fluid should be renewed at three-year intervals, but that is already figured into the service costs. Any 2.4-litre petrol car registered after 23 March 2006 falls into Band G for emissions, so its VED is £300. Diesels aren’t affected, but if you want one for its economy, remember it’ll cost you more.

What to look for Oil consumption on diesel models can be high, at up to a litre every 600 miles. However, the oil-burner offers the same refinement as the 2.4-litre petrol powerplant, delivers superior economy and has much more torque. What’s more, it keeps its value better – so it makes the more sensible buy overall.

Alternatives You’re spoiled for choice here, but it’s hard to beat the space and value offered by the Vauxhall Vectra.

While the recently replaced Ford Mondeo stands up as an ultra-cheap option, you might also want to consider the slightly more costly Mazda 6.

None of the Honda’s German rivals is able to match the Tourer’s luggage capacity or its sheer value for money, but the BMW 3-Series, Audi A4 and Mercedes C-Class are all worth having a look at if your budget permits. However, the closest rival to the Accord is the Volkswagen Passat, which offers a prestigious badge and excellent build quality.

Verdict Although the rival models from BMW, Mercedes and Audi are great to drive, the stylish Tourer remains a seriously desirable second-hand car and marked a big leap forward for the Japanese brand. Don’t expect to find many bargains, though, and while it’s a great load-carrier, the estate version is much rarer on forecourts than the saloon.

As a result, tracking down the right car might not be easy as you think. Take your time to search for the perfect example and you’ll be glad you did – Accord owners are enthusiastic about their motors for good reason.

Recall history and Driver Power results NOVEMBER 2004: Accord models built from October 2003 to June 2004 suffered from a lack of protection to the wiring harness. However, only saloon models were affected.

2007 DRIVER POWER: Dropped 10 places from fourth to 14th, but still a strong finish. Low running costs made it popular.