Honda's Civic hatch gets Type-R inspired styling upgrades in new Sport Line spec but do they help it keep pace with rivals? 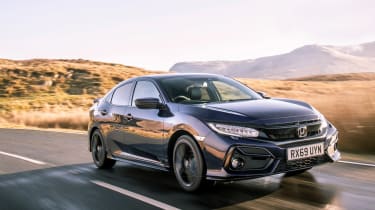 As ever, the Honda Civic is a worthy alternative to family favourites like the VW Golf and Ford Focus. It remains practical, fun to drive and well built, but the changes Honda has made to the ageing infotainment system are insufficient in such a tech-focused class. Furthermore, while these Sport Line tweaks add a dose of Type R style, they come at a price; they would – and indeed, will – make much more sense on the cheaper Civic SR.

The fuss around family cars may have centred firmly on the all-new Volkswagen Golf of late, but that’s not say other manufacturers are resting on their laurels. Conscious of quite how capable Wolfsburg’s hottest hatchback may be, makers are rushing to make improvements to their fast-selling favourites.

Honda is no exception – the brand quietly updated the Civic with a smattering of stylistic and ergonomic tweaks only last month. Not content, it has now added a racier Sport Line model to the range, designed to steal sales from popular rivals like the Ford Focus ST-Line and SEAT Leon FR.

Instead of acting as a standalone spec, Honda’s sporty styling tweaks are applied to the flagship Civic EX, and will later be added to the to cheaper SR cars, too. For £1,000, you can now turn your somewhat dowdy Japanese runaround into a semi-skimmed wannabe Type R. 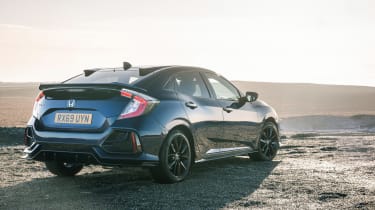 From the outside, it mimics its more serious sibling with a small rear wing, faux diffuser and subtle body kit. The Civic Sport Line features a set of unique kerb-friendly 17-inch alloy wheels, too, while inside there’s some red stitching and new textured panels for the dash.

Overall, it’s a classy approach, and the extra cash required will probably pale into insignificance on a monthly PCP deal. The fact it’s currently only available on the top-spec trim is more likely to put buyers off – especially when you consider a Ford Focus ST-Line with a similarly-powerful 1.0 EcoBoost 125PS engine starts from just over £22k.The Civic remains a lovely car to drive, however; the short, snickety six-speed gearbox is among the best in the business, and body control is excellent for a car of this type. The engine is stronger than its 0-62mph time might suggest, and the steering offers up a consistent weighting that makes the Civic as pleasurable around town as it is on a winding country road.

The ride is well judged, too, striking a neat balance between control and comfort. EX cars like ours get adaptive dampers as standard, but we’d leave them well alone; the normal drive mode serves up all the composure you’d ever need, without making the Sport Line too stiff. Slightly intrusive road noise represents the Civic’s only black mark in what is an otherwise impressive driving experience.

Elsewhere, Honda has listened to early criticism of the Civic’s cabin and has added physical controls for the infotainment system. It still centres around a slightly fiddly touchscreen, but there is now a line of shortcut buttons down the side – as well as a chunky volume switch that’s simple to find while driving. The climate controls are more straightforward to operate, too. 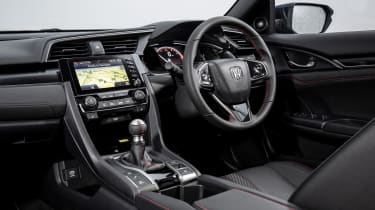 As before, quality is excellent, and while the cabin doesn’t feel quite as hi-tech as the Golf or Ford’s, the part-digital instruments are easy to read, if not all that customisable. The plethora of controls on the steering wheel can take some time to get used to, however.

The ergonomic changes to the infotainment and climate controls are welcome, but the Civic isn’t without its flaws in this regard. It still suffers that nasty step in the tailgate, which cuts right through your rearward visibility. At least it’s not an issue while reversing, as top-spec Sport Line cars get a back-up camera as standard.

Open up the boot and you’re presented with one of the biggest boots in this class – and the same is true of the rear seats. It’s a spacious car in which to spend time, in fact, trumping most of its closest rivals for practicality and storage space.