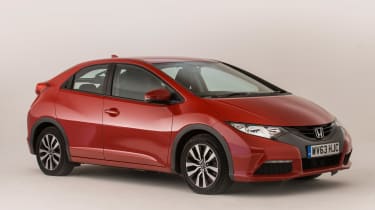 Across Europe, more people buy a small family car than any other type of model, and competition in this market is fierce as makers try to come up with cars that can take on the biggest sellers.

For many years, Honda’s contender in this class has been the Civic, and it’s always been promising on paper, as it has all the usual Honda characteristics that add up to a car that’s incredibly easy to own. Sadly, unless you’re considering the hot Type R – which is one of the best drivers’ cars on sale – the Civic isn’t as involving as some rivals. But if you’re looking for reliable, practical family transport, few cars fit the bill as well. 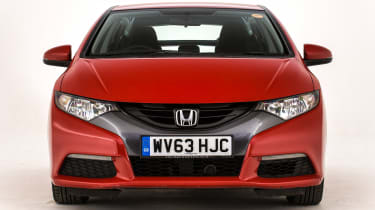 The Civic Mk9 hit UK showrooms in June 2012 with 1.4 or 1.8-litre petrol engines or a 2.2-litre diesel. There was a five-door hatch only (the Mk8 had also been offered as a three-door), but in February 2014 a Tourer estate was introduced. This came with 1.8 petrol or 1.6-litre diesel engines, the latter having been introduced in the hatch a year earlier. The Civic 1.8 Ti of September 2012 was limited to 1,000 examples, with sportier details inside and out. A facelift to the range in spring 2014 brought fresh styling, extra kit and a revised trim structure (now S, SE Plus, Sport, SR and EX Plus), but it was only in July 2015 that we finally got a new Civic Type R, with 306bhp, starting at £29,995.

None of the engines is weak, but the 1.4 petrol isn’t as muscular as the three alternatives. In the real world, it’s no more frugal than the 1.8 manual; while the 1.8 auto is fine to use, it’s less economical. 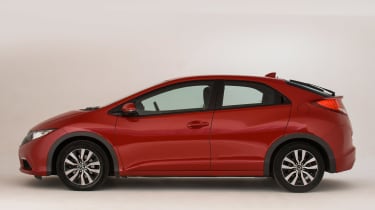 Alternatives to the Honda Civic Mk9

Buyers are spoiled for choice in this class. The Volkswagen Golf is the consummate all-rounder with its refinement, great build quality, strong image and engaging driving experience. Volvo’s V40 looks smart and is incredibly safe, but compromises practicality.

Most fun to drive is the Ford Focus, which also majors on value, while reliability and practicality are strong suits, too. If you want the most car for your money, check out the Vauxhall Astra; it comes with plenty of kit as standard (if you avoid the entry-level models), but it’s no class leader in any area.

Don’t overlook the Mazda 3, either, as it looks great, is entertaining to drive, reliable and generally well equipped, while it features some cracking engines as well.

The automatic wipers can refuse to work properly. It can help if you disconnect the battery, replace the sensor or update the software. 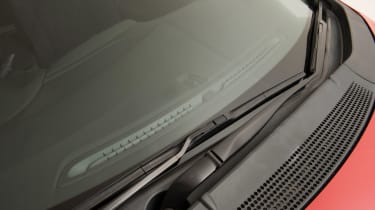 Some owners have reported that the shutlines on their cars aren’t as even as you might expect, especially those for the tailgate.

Thewindscreen washer reservoir filler cap isn’t retained and is often dropped down into the engine bay, where it gets stuck. See if it’s there. 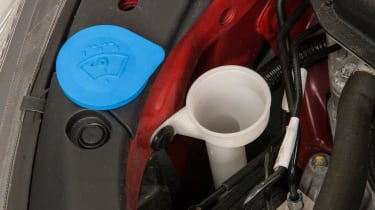 The paint tends to be quite soft, and as a result it chips and scratches easily. Check the nose, roof, bonnet and door mirrors for signs of damage.

Once a Civic reaches its third birthday, it’s eligible for cut-price maintenance, with a minor service pegged at £155 and a major one £255 for petrol models (£175 and £275 for diesels). There are no cambelts to worry about, but fresh brake fluid is needed every three years, at £50.

The Civic Mk9 has been the subject of just the one recall so far, which was issued in November 2012. It affected some diesel-engined examples built up to September 2012, but just 244 cars were caught up in the campaign. 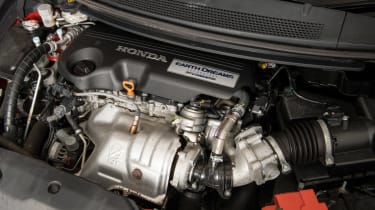 The problem related to incorrect software, which allowed the car to be started in gear with the clutch not depressed. The solution was to reprogramme the electronic control unit (ECU) – or to ensure the car was out of gear when the engine was started.

The latest Civic made its debut in our Driver Power satisfaction survey last year, finishing 41st. Owners rated its practicality and running costs highly (it ranked 23rd in both categories), plus its reliability (45th) and in-car tech (58th). But driving dynamics let the car down; it came 125th for performance, 121st for handling and 103rd for ride quality.

There are plenty of good reasons to buy a Civic, not least because it’s built in Britain, at Honda’s Swindon plant in Wiltshire.

Reliability is also everything you’d expect from a brand consistently rated for making the most dependable cars on the road. Throw in class-leading practicality, efficient engines plus sharp looks, and it appeals even more.

We ran a Tourer 1.6 i-DTEC for six months and found it brilliantly practical, frugal and utterly reliable; the only downside was that the front seats didn’t offer enough support.

Whether you’re buying a hatch or estate, you get the same attributes, and while the Civic isn’t the cheapest car in its class, what price can you put on peace of mind?