We test the new Honda Civic on UK roads for the first time in EX trim with the 1.0 Turbo 3-cylinder engine 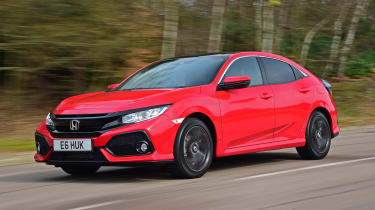 In pushing the Civic upmarket Honda has diluted some of its quirky predecessor’s character. Yet the trade off is that the newcomer features the sort of comfort and refinement that matches the best in the class, plus it also delivers a composed driving experience, brisk performance and a plenty of safety kit. However, its expensive in EX guise, has above average running costs and trails for cabin quality. It also suffers from an engine installation that isn’t as refined as VW Golf’s, plus its infotainment system feels a generation behind. In a class as competitive as this, the good but not great Honda doesn’t quite do enough to topple the class leaders.

The latest Honda Civic has been over four decades in the making. Now in its tenth generation, the Japanese machine has grown from a tiny city car into one of the largest compact family hatchbacks there is.

However, for this all-new model, Honda has abandoned the quirky design and clever packaging of its predecessor. Instead it’s gone for a more mature and upmarket approach that it hopes will lure buyers away from popular models such as the recently revised VW Golf and SEAT Leon.

We’ve already been impressed by the Civic on smooth Spanish roads, but how will it fare in the UK? To find out, we grabbed the keyless entry fob to one of the first models to roll out of the brand’s British factory in Swindon. 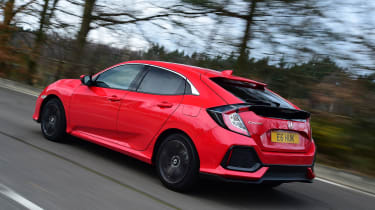 However, before climbing aboard, you’ll be distracted by the car’s styling. As ever, design is subjective, but parked alongside the classy Golf and sleek SEAT, the Honda looks just a little ungainly. It’s lower and wider than before, giving it more of a sporty stance, but the messy collection of lines, curves and creases results in a fussy look. It’s also hobbled by the thick band of gloss black trim above the headlamps that gives the car a permanent scowl, and the heavy-handed, bloated rear end treatment.

Climb aboard and matters improve. The old car’s bold double deck dashboard has been ditched in favour of a more straightforward affair. There’s an angled centre console and high transmission tunnel, plus the TFT dials are now arranged in a conventional cowl ahead of the driver.

Soft touch materials cover the top of the dash, but lower down there a cheaper plastics that look and feel low rent. That said, the interior is solidly screwed together and gives every impression of being well up to the rigours of family life.

SR models and above also get the brand’s CONNECT infotainment system that packs Garmin sat-nav and decent smartphone connectivity courtesy of Apple CarPlay and Android Auto. However, compared to the slick Renault R-Link and VW Composition set-ups, the Honda’s system looks dated and features a clunky menu system.

You sit lower than before, courtesy of Honda’s decision to relocate the fuel tank from under the front seats to the more traditional location ahead of the rear axle. This change means that the old car’s distinctive flip-up Magic Seats have been ditched and replaced by a normal folding bench. Still, there’s good head and legroom, while the boot boasts a cavernous capacity of 478-litres. Less impressive is the two-piece parcel shelf that comprised a thin fabric panel attached to the tailgate and a flimsy, cheap feeling retractable panel behind the rear seats.

Prod the red starter button and the new 1.0-litre three-cylinder turbo fires quietly into life. With 127bhp and a generous 200Nm of torque it helps deliver brisk acceleration on the road, despite our EX model’s hefty 1,348kg kerbwight. You have to work the unit hard to make decent progress, but precise action of the six-speed manual helps make the most of the available performance. 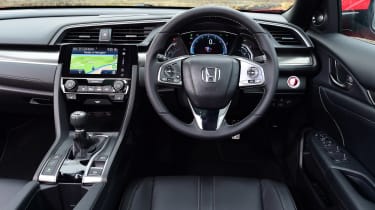 While the thrummy engine is keen to rev, it sends tingling vibrations through the cabin, particularly when accelerating from low speeds, and is more vocal than similar units in the VW Golf and Vauxhall Astra.

Turn into a corner and you’ll discover the Honda has lifeless but surprisingly quick steering, which gives a feeling of surprising agility. The Civic also benefits from a very effective torque vectoring system, which helps keep you locked on your chosen line – although the feeling of grip it creates is a little artificial, as you’re constantly aware of the system working away in the background. VW’s similar XDS set-up is very nearly as capable, but feels more natural on the move.

Our EX trim car gets adaptive dampers as standard, which in Sport mode deliver decent body control without totally upsetting the ride. However, the set-up is best left in Comfort as it the car feels just as composed through a series of bends yet rides bumps with the same sort of suppleness as the Renault Megane. 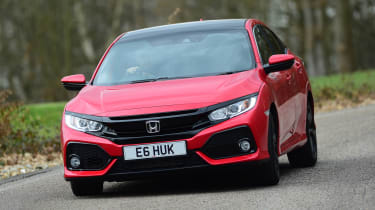 This comfort is backed up by strong refinement, too. The noisy engine settles down to a distant hum at a 70mph cruise, while wind noise is actually slightly better suppressed than in the upmarket Golf.

This relaxed feeling is bolstered by the EX’s generous kit count, which extends to leather trim, heated seats, keyless entry, a panoramic roof, sat-nav and an 11-speaker stereo. However, at £23,040 this equipment doesn’t come cheap.

Business users will also want to consider the Civic’s surprisingly high 117g/km CO2 emissions, which don’t compare favourably to the 109g/km figure of the 1.0-litre TSI fitted to the VW. In fact, we’d recommend ignoring this EX in favour of the Civic SR, which gets nav, climate control and reversing camera among other things, yet costs a more competitive £20,180.

Better still, all models in the range get an impressive tally of safety kit that runs to adaptive cruise control, autonomous emergency braking, traffic sign recognition and lane keep assist and departure warning.