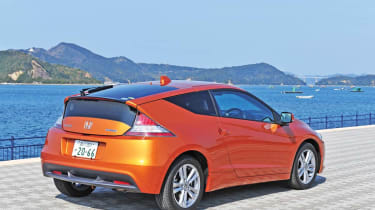 As the world’s first hybrid with sporting intent and a six-speed manual box, the Honda CR-Z has been worth the wait. Over a challenging, winding road, the cool new coupé was quick, stable and fun. That won’t be enough for some enthusiasts, who will still feel the Japanese manufacturer should have gone further in sharpening up the chassis and suspension.  Honda, for its part, wanted to create a car with a more equal balance between speed, handling, comfort and eco-friendliness. And with its low CO2 emissions, the firm has delivered, by building a machine that’s a lot more fun to drive than an Insight, but still as clean. The arrival of the CR-Z confirms that hybrids don’t have to be boring.

Britain’s love affair with hybrid cars is growing ever stronger – but until now, our obsession has been built on machines that offer low CO2 and high mpg, rather than great performance. So, can this bullet-shaped new 1.5-litre hybrid coupé be the car to put that right?

The daring Honda CR-Z will hit UK roads in June, and with prices set to start at £16,999, the CR-Z is aiming to reinvent the sector. It has a 0-60mph sprint time of less than 10 seconds, and an emphasis on performance that has been missing from petrol-electric rivals.

To find out more, we headed to the scenic southern Japanese island of Shikoku foran early first drive.

Under the skin, the new CR-Z is loosely based on the latest Insight – but as you soon discover, the car is much sharper, quicker and, most importantly, more entertaining.

Away from the line, you can feel a tautness in the suspension that isn’t evident in the family-oriented Insight saloon – which is a good thing. As you start to slip through the manual gears and up the pace, the newcomer quickly proves itself to be well balanced and very responsive.

Up front, the 1.5-litre hybrid feels punchy, while the six-speed manual box – the first in a hybrid since the original Insight was sold – is quick, precise and fun to use.

All of which comes as a bit of a revelation, a relief even, when you consider how things could have turned out. At motor shows and preview events, rumours had spread about the model’s likely weight and a power shortfall.

But the CR-Z is proof that a car can be much more than the sum of its parts. Many expected Honda to deliver a hard-edged, high-rev performance machine, but the CR-Z is anything but.

Although it’s sporty, that focus on balancing pace with a green nature hasn’t gone away. With combined fuel economy of 56.4mpg and a 117g/km CO2 output, the CR-Z is about more than thrills.

The formula this time sees a Jazz-based 1,496cc i-VTEC engine coupled to a small electric motor. Total power is 125bhp, while torque peaks at 174Nm.

As you drive, you find the CR-Z’s star act is its easy, low-rev urge, with that extra boost from the electric motor providing a helping hand, especially below 2,000rpm. And this driveability is key, because the 1.5-litre engine starts to get loud as the revs climb past 5,000rpm. Keep the throttle to the floor, and you soon reach the 6,500rpm limit. So this car is no modern-day successor to the brilliant late Eighties VTEC CR-X, with its 8,000rpm maximum.

Still, as with the Insight, the hybrid drivetrain is seamless and smooth. With Honda’s IMA hybrid system as it is here, you can’t run on electric motor alone, which will hamper the new car’s appeal to some motorists.

Credit to Honda, though, for the way the CR-Z handles.

It’s shorter and wider than the Insight, set lower to the ground, and gets its own stiffened chassis and suspension set-up, plus a set of 16-inch sports tyres.

Through the twists and turns of some entertaining mountain roads, the car felt nimble, and there’s a consistent, linear feel to the steering and turn-in. Yet ultimately, it’s predictable and safe rather than thrilling. There’s a fair degree of understeer and body roll on the limit, and the ride is firm but well controlled.

Honda will be more interested in telling you about the wealth of modern technology on board, such as the clever 3-Mode Drive System. Dashboard buttons give you the choice of Sport, Normal and Econ, which alter settings for the throttle feel, transmission and electric power-steering depending on how you want to drive.

The speedometer ring also changes colour to suit (red, blue or green). This is just one of several neat facia gizmos that monitor your driving style.

The CR-Z’s cabin is a mixed bag. It offers a superb, sporty driving position and impressive seat support. But not everyone will appreciate the busy cabin design, with its large, retro-style pods either side of the wheel. The overall finish is good, bar some cheap plastics inside the doors.

Unfortunately, the minimalist back seat area is barely usable for adults, while for the driver, rear three-quarter vision isn’t great. On the plus side, there’s a reasonable load space, with the hybrid battery housed beneath the boot floor.

On Japanese roads, the car acquitted itself well, even if it’s not quite the performance model some might have hoped for. In its home market, orders are flooding in – and Honda’s pitch for the car, as a new “hybrid café racer”, sums up the CR-Z well.