Does the mid-spec version Honda's sporty hybrid coupé add up? 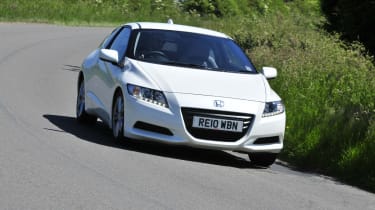 ALTHOUGH the CR-Z might seem expensive for what’s essentially a two-seater, when you consider that a Toyota Prius costs a lot more without offering anything in the way of driver appeal, it starts to make sense. Despite a lack of outright pace, it is superbly engineered, has lively handling and accurate controls. The sharp styling also makes it a tempting prospect, and this mid-spec Sport trim model offers the best value in the range.

With a price tag of £17,999, it offers buyers a significant saving of £2,000 over the GT, but does without leather seats and satellite-navigation.

Under the skin, it shares the same technology. The smooth 112bhp 1.5-litre petrol engine gets an additional shove from an on-board electric motor, which provides an extra 79Nm of torque and 10bhp from only 1,000rpm.

The CR-Z is the first hybrid sold in the UK to get a manual transmission – which highlights its sporting credentials. The steering, brakes and short-throw gearbox are all accurate and sharp, while the lower, stiffer Insight-based chassis makes for an entertaining drive. On paper, the performance isn’t exactly electrifying, but the engaging dynamics deliver a fun factor that’s missing from other hybrids.

An important part of the experience is the hi-tech interior design. There’s a dizzying array of dials and readouts presenting different information about the battery status, economy and which driving mode you’re in – Sport, Normal or Econ.

As well as driving thrills, the Honda offers impressive efficiency. Combined fuel economy of 56.5mpg and CO2 emissions of 117g/km are excellent for a sporty petrol hatchback – and qualify the coupé for first year road tax exemption – although they still fall short of truly green cars such as VW’s Polo BlueMotion. Fuel returns are also likely to take a hit if you use the performance.

Practicality could be better – the sloping roof means the back seats are strictly for kids – and cabin quality is average. However, it remains an appealing and refreshingly different package. This Sport model doesn’t have as many gadgets as the top-spec GT, but it still makes sense. And, most importantly, its fuel efficient, fun-to-drive powertrain proves that hybrids have a place in sports cars.

Rival: VW Scirocco 1.4 TSI The twin-charged VW is pricier at £18,860, but it offers more practicality and a classier cabin. A higher CO2 output of 146g/km and poorer fuel economy than the CR-Z are the price you pay for a little extra performance.