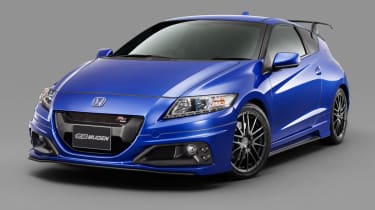 A couple of weeks ago, Honda's official tuning arm, Mugen, unveiled a performance version of the CR-Z hybrid hybrid coupe. Only 300 cars will be sold – all in Japan – but now Honda UK has confirmed that a more powerful CR-Z will be offered here within a year.

The Japanese car you see here is called the Mugen RZ. It features the same 1.5-litre petrol engine, but adds a supercharger to increase power from 112bhp to 154bhp, and deliver 185Nm of torque. That’s backed up by an electric motor producing 20bhp and 78Nm for a total of 174bhp and 263Nm.

There are no performance or fuel consumption figures, but expect the car to cover 0-62mph in around eight seconds and return over 50mpg.

The styling has also been enhanced with a brash bodykit, new grille, deeper side skirts and a rear diffuser, plus a huge roof spoiler at the back. Other highlights include lowered suspension, 17-inch wheels and a sports exhaust.

Although the car that will be sold in the UK will also feature styling, engine and chassis upgrades, it’s under development by Mugen Euro (a separate company to Mugen in Japan).

We drove a prototype version in June 2011, which also featured a supercharged hybrid engine, although with a total output of 200bhp and a 0-62mph time of around 6.5 seconds. The UK car will go on sale next year.