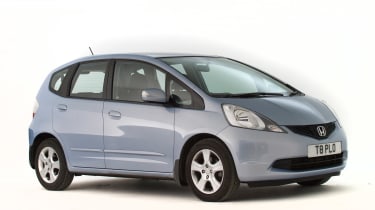 If you’re looking for a car that’s easy and cheap to own as well as extremely practical, the Honda should fit the bill. However, the idea of Jazz ownership will appeal only if you’re not too bothered about the driving experience; this supermini-MPV has stodgy handling and a limited range of small petrol engines. Refinement could also be better, so if you do a lot of motorway driving you might find the Jazz gets wearing quite quickly. Despite its failings, the Honda is always in demand thanks to its exceptional levels of reliability. However, there are plenty of cherished one-owner cars available, and those owners generally love their Jazzes. Recommendations don’t come any higher.

When the original Honda Jazz hit dealers in 2001, it effectively launched the supermini-MPV class. More versatile than a regular supermini, it stood out with its novel cinema-style rear seats and Tardis-like interior. And the Mk2 version, launched in 2008, continued in much the same vein.

Over the years, a few other manufacturers introduced models that were a match for Honda’s smallest car on paper, but they couldn’t compete with the Jazz’s knock-out punch – its industry-leading reliability. 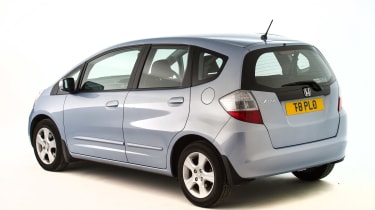 The car has regularly been seen towards the top end of the chart in our annual Driver Power satisfaction survey, and only slipped out of the top 100 in 2016. Even then, it was still placed highly enough to beat the Audi A1, Vauxhall Meriva Mk2 and Skoda Fabia Mk2.

The Honda Jazz first arrived in 2001 and is now in its third generation, however it is the Mk2 model that was on sale between 2008 and 2015 that we’re focusing on in this review. 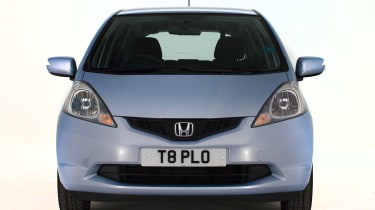 The second-generation Jazz went on sale in November 2008, exactly seven years after the pioneering original. As with the Mk1 it was a five-door hatch only, and at first there were 1.2 or 1.4-litre petrol models with a manual box only. From January 2009 the 1.4 was also available with an i-Shift semi-auto.

A revised Jazz entered UK showrooms in February 2011, with fresh bumpers, tweaked suspension, a CVT (continuously variable transmission) in place of the previous i-Shift and upgraded cabin trim. At the same time, a hybrid arrived with its own trim options (HE, HS and HX), which were similar to those of the regular Jazz. The Mk2 was replaced in September 2015 by the third-generation car.

All Jazz engines are willing, but the 1.2-litre isn’t powerful enough for a lot of motorway driving. The 1.4 feels a better cruiser. The automatic boxes aren’t very nice to use, so we’d stick with a manual – the CVT auto is particularly unpleasant in the hybrid. 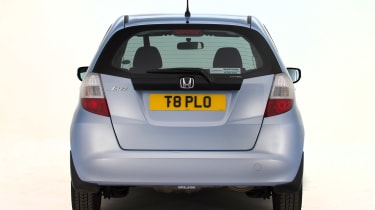 Entry-level (S trim) cars get electric front windows, electrically heated and adjustable mirrors plus Isofix mountings; the SE adds alloys and air-con. The ES has a multifunction steering wheel and power-folding mirrors, and the range-topping EX adds climate and cruise control, auto lights and wipers plus a panoramic glass roof. The 1.2 initially came in S or SE guises only; the 1.4 as an ES or EX.

Alternatives to the Honda Jazz Mk2

The Nissan Note offers similar space to the Jazz, and is well equipped and reliable. A cheaper alternative, thanks to its lower profile, is Renault’s Grand Modus, which is closely related to the Note, but uses different engines. Both come with a sliding rear seat.

The Vauxhall Meriva is stylish but costly, while its rear-hinged back doors can be hard to live with. A decent spec helps, though. 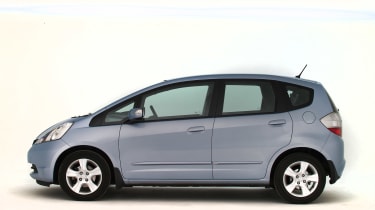 Hyundai’s ix20 is also well equipped and spacious, and while it’s no class leader, it’s competitively priced. The same goes for the mechanically similar Kia Venga, which has a longer warranty. The Ford B-MAX has proven less of a hit than expected, but it’s good value, great to drive and versatile.

Clicking sounds from the brakes when cold are down to the pads moving in the calipers. Once things have warmed up, the noise usually disappears.

Powerplants can sound surprisingly tappety, especially when cold. Once you get going things become quieter, but don’t expect complete silence. 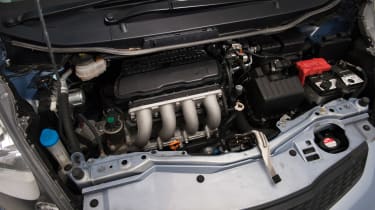 There’s no spare wheel fitted as standard, but you can order one as a spare part. It’ll cost you £160, though, for the wheel and tyre as a package.

The Jazz can suffer from various tyre issues; they can perish, wear quickly and some cars have unusual sizes fitted, which pushes up the cost of replacement.

Practicality is the Jazz’s trump card thanks to a rear seatbase that can be folded up or down. However, the seats themselves could be more comfortable, and some of the materials look cheap. Head and legroom are superb, though, as is boot space; the Jazz can stow up to 379 litres with the seats up. 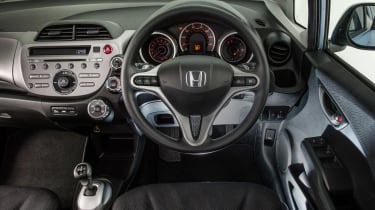 Whether it’s got hybrid or regular petrol power, the Jazz needs maintenance every 12,500 miles or 12 months.

Services initially run minor, major and intermediate, and for cars up to three years old they cost £195, £265 and £245 respectively. However, after the model’s third birthday, check-ups alternate between minor and major, priced at £155 and £255 respectively – although on cars with a CVT gearbox they cost an extra £75.

Included in these figures is fresh brake fluid every three years or 37,000 miles (£50 if done separately), and new coolant every 10 years or 120,000 miles (£65 separately). All engines use timing chains so there are no cambelts to replace, but the gearbox oil has to be renewed every eight years or 75,000 miles, at £39. 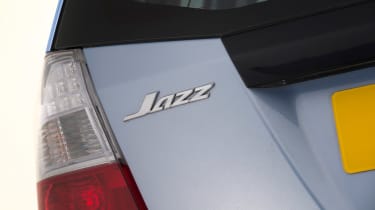 The Jazz Mk2 has been recalled six times. The first, in June 2010, related to a brake pedal pin detaching on cars built from February to April that year, increasing travel and stopping distances. In August 2010, possible tyre failure saw cars made from September 2009 to May 2010 recalled.

Jazzes produced from August 2010 to September 2012 were recalled in February 2013 over brake fluid leaks. Last year there were three recalls (two in June, one in October) due to airbag problems with cars built up to December 2011.

The Jazz Mk2 is more than eight years old, so a ranking of 112th in our Driver Power 2016 satisfaction survey is still very good. It scored fifth for practicality and 13th for reliability. Rankings of 60th for running costs and 146th for ride quality, plus 148th for performance and handling, are where it shows its age.