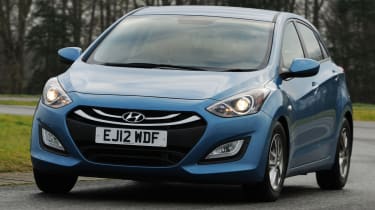 Seeing as the i30 lost out to the old Golf the last time we tested it, it’s no surprise that it finishes second here. The Hyundai has fallen further behind the VW in terms of cabin quality, refinement and desirability, while weak residuals and a firm ride also hinder it. Still, it’s better to drive and cheaper to buy than the Auris.

The i30 is a simple but well executed family hatchback that’s competitively priced and comes with a five-year warranty. It’s helped Hyundai become a contender at the sharp end of this class. With its no-nonsense focus on value and quality, it’s a clear Toyota Auris rival, but how does it compare to the VW Golf?

The Hyundai definitely has the edge for value. This 1.6 CRDi BlueDrive model costs only £17,995 and emits just 97g/km of CO2, although predicted residuals of 36.3 per cent eliminate some of the i30’s price advantage.

Fortunately, this car has more strings to its bow than value. For starters, the Hyundai has more kerb appeal than the brand’s previous efforts. Like the Toyota, its styling is a mix of sharp creases and round edges, but we think the i30 looks more convincing than the Auris.

Inside, the modern dash is brightened up with metal-effect edging, but despite the high centre console, some of the stereo controls are a stretch. Fortunately, a multifunction steering wheel is standard. Overall, the layout is less complicated than the Auris’ and, despite some blind spots caused by the chunky A-pillars, the i30 has a pretty good driving position.

Build quality and cabin materials are a match for the Toyota’s, but there are still some hard plastics and shiny surfaces, so it can’t challenge the VW for upmarket ambience. Old-fashioned control stalks and flimsy seat height adjusters are examples of details that put the i30 behind the Volkswagen for quality.

Still, rear legroom is a match for the VW’s, while a flatter transmission tunnel means the middle seat is less restrictive. Boot space is on par with the Golf’s, and with the seats folded, the Hyundai has the biggest capacity here.

Unfortunately, if you jump into the i30 after driving the Golf, you’ll soon notice how the engine chugs a little at idle and clatters more under load. But the Hyundai has 10Nm extra torque, at 260Nm, so it closely matches the VW for in-gear performance.

And the standard manual gearbox makes it a lot more relaxed under acceleration than the CVT-equipped Toyota.

However, a rigid suspension set-up means that there’s more road noise to be heard on the motorway than in the Golf.

Also, while ride quality is better than the Auris’, the i30 can’t iron out imperfections as well as the VW. It thumps into potholes at low speed, while motorway expansion joints resonate through the cabin.

At least the Hyundai’s handling is competent. There’s a decent amount of grip, and while there’s some body roll in corners, it’s largely kept in check. But the steering weights up either side of the straight ahead, the gearbox has a slightly slack shift action and overall the i30 lacks the dynamic polish of the Golf.

It didn’t prove to be quite as fuel-efficient on this test, either. Like the Volkswagen, the BlueDrive-spec car benefits from a standard stop-start system, and we averaged a pretty reasonable 39.9mpg. But that’s still 10mpg shy of the Golf’s equivalent figure.

At £17,995, the i30 Active undercuts the Excel-spec Auris’ list price by £3,750, so even when you take the Toyota’s very generous standard equipment into account, the Hyundai makes a stronger case for itself financially. Especially as it’s better to drive and more refined than its more expensive hybrid rival.