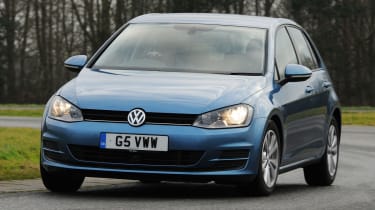 It’s hard to find fault with the new Golf. It looks sharper than before, the cabin is brilliant and it’s a joy to drive. Excellent running costs and good fuel economy mean it makes financial sense, too. The 1.6-litre diesel with a five-speed gearbox isn’t quite as refined as the larger 2.0-litre, but it trumps both its rivals here.

If the new Toyota Auris is going to be a class-leader, then it has to beat the latest VW Golf. But that’s no easy task, as the seventh generation of this benchmark family hatch is lighter, bigger, more efficient and smarter than ever before. In 2.0-litre TDI GT form, it took a group test win over the Ford Focus and BMW 1 Series, so is the cheaper 1.6-litre TDI SE just as good?

It certainly looks the part. The Golf’s taut lines are a little conservative, but it’s all about small details: it’s hard to find fault with the car’s perfectly executed exterior design.

The good news continues inside, where the classy yet straightforward cabin hits the spot with its top-notch finish, first-rate materials and smart design. The dash is angled towards the driver and, with lots of wheel and seat adjustment, it’s easy to get comfortable.

All Golfs get a simple-to-use 5.8-inch colour touchscreen, but this SE does without sat-nav as standard. Still, there’s lots of stowage, with a huge glovebox and large centre cubby, while the SE gets storage trays under the front seats and a through-load hatch between the rears.

The 380-litre boot is well shaped, as well as being 20 litres bigger than the Auris’. If you fold the rear seats and fill the car to the roof, you’ll be able to carry 1,270 litres. Rear legroom is better than in the Toyota, although a large transmission tunnel makes the middle seat a little tight. But overall, it’s hard to ignore the Golf’s comfort, quality and practicality.

It extends its advantage on the move, as refinement is a step ahead of the competition. While the 1.6-litre diesel engine isn’t quite as subdued as Volkswagen’s larger 2.0-litre, the cabin is still quiet and there’s far less road and wind noise than in the other models. The ride is also the best here, with the car easily soaking up bumps and imperfections that will unsettle the Hyundai i30 and Toyota.

The last Golf we tested was fitted with £795 Adaptive Chassis Control active dampers, and this conventionally sprung car has a slightly firmer edge. However, it still strikes a great compromise between handling and comfort.

Head into a corner and the VW’s class-leading body control and grip impress – there’s now enough driver engagement to rival the Focus and the rear-wheel-drive 1 Series.

When you drive it back-to-back with the Auris, the Golf’s dynamic abilities are even clearer. The steering is precise and well weighted, while the strong yet progressive brakes make smooth driving much easier than the Toyota’s jumpy system. Some might be surprised that this all-new Golf only has a five-speed gearbox, but it’s flexible enough to match the six-speed i30’s performance in the lower gears. The five-speed doesn’t seem to affect fuel economy, either: we saw an impressive average of 50mpg.

Add strong residuals plus fixed-price servicing, and the Golf makes financial sense, too. The £21,745 SE is £1,245 cheaper than the Auris, but you’ll need to spend an extra £490 to get a five-year warranty – something Toyota and Hyundai offer as standard.