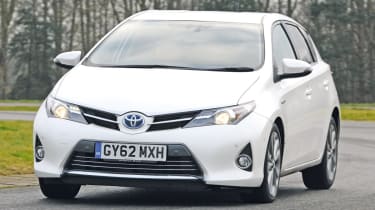 Hybrid technology sets the Auris apart and makes it a cheap company car – but a firm ride, harsh CVT transmission and remote handling all count against it. And while cabin quality is decent, it lacks the Golf’s space and wow factor. You do get a five-year warranty, although the diesel version may be a better choice for some.

Toyota has been producing family hatchbacks for generations. The big-selling Corolla’s history stretches further back than the VW Golf’s, but ever since the Auris badge was adopted in 2007, Toyota’s hatch has struggled to maintain its own identity.

It has lacked the premium aspirations and rock-solid image of the Golf and come under pressure from improved Kia and Hyundai models at the other end of the market. So it’s not surprising that Toyota has set out to make a big statement with the new model.

The fresh exterior design includes a rakish front end, while the body is 30mm lower than before. But the lines are mismatched at the back and a shallow rear screen hurts visibility. Lined up alongside the conservative yet beautifully detailed Volkswagen, it’s hard to see the Toyota’s looks winning over customers.

It’s a similar story inside, where the bluff dash isn’t as friendly or inviting as the VW’s. Build quality is solid, but the cabin doesn’t feel as upmarket as the Golf’s. And while the controls are well laid-out, the dash screen is dated and not as easy to use as the VW’s.

There’s also less steering wheel and seat movement, so although you sit lower down than in the old car, the Auris’ driving position isn’t quite as good as the Golf’s, either.

Standard kit is generous, though: heated seats, a multifunction steering wheel, DAB radio, cruise control and keyless entry are all included. Our biggest gripe is the lack of rear legroom. The wheelbase hasn’t changed and the Auris is now one of the smaller cars in its class. On the plus side, a flat floor makes things comfier for the middle seat occupant. And by moving the batteries under the seats, Toyota has given the Auris Hybrid the same 360-litre boot capacity as the conventional model.

So you no longer have to compromise on boot space if you choose the Hybrid – and Toyota thinks increasing numbers of UK buyers will. But anyone not familiar with the petrol-electric drivetrain may not like how the CVT gearbox affects the car’s driving experience.

First-timers will spot the rev counter has been replaced by a power meter. Depending on how hard you press the throttle, the needle swings between charge, eco and power. Coast along in charge or tickle the throttle in eco, and refinement is reasonable. But press the throttle harder into the power section and the box sends the revs skywards and leaves them there until you back off, creating a big racket.

Given Toyota’s bold eco-friendly claims, the Auris doesn’t enjoy a big efficiency advantage over its conventional rivals. Despite the clever technology, our mix of driving averaged only 41.8mpg – 8.2mpg less than the Golf’s figure. And while the Hybrid’s 91g/km CO2 output is impressive, both rivals emit under 100g/km. Worse still, the Auris’ refinement problems aren’t limited to the CVT box.

As you drive faster, road and wind noise become intrusive, while the suspension thuds into expansion joints and feels rigid in town. Toyota’s attempts to make the Auris more exciting to drive haven’t been that successful, either. The steering is overly sharp and very pointy compared to that of the outgoing car. Factor in its artificial weighting and minimal feedback, and the Auris feels disconcertingly twitchy through a series of corners.

Body control is decent and there’s more than enough grip in wet and dry conditions. But on a twisty road, the Auris simply isn’t as engaging as the Golf. Everything is too sensitive, so it never feels as relaxing or natural to drive as the VW. We also disliked the grabby brakes, which make it hard to slow the car down progressively.

More positively, the hybrid set-up allows for short periods of electric-only running around town. But in almost every other driving situation, the Golf and Hyundai i30 are more refined and dynamically superior. The fantastic GT 86 coupe proves Toyota can produce a car that’s fun to drive, so it’s a shame the company couldn’t engineer some of that magic into the Auris.

And the Hybrid doesn’t make a very convincing case for itself when it comes to costs, either. While the Excel model’s generous tally of standard equipment goes a long way to explaining the highest price tag here, our experts reckon its residual value after three years will be 10 per cent lower than the Golf’s, and only slightly ahead of the much cheaper i30’s.

Plus, while the Toyota is the cheapest company car choice of our three models, our figures show the VW will cost you less every time you visit the pumps.

So the new Auris definitely represents an improvement on the outgoing model, but it looks unlikely to have done enough to take overall class honours.

Go Back to2nd Hyundai i30 1.6 CRDi
Continue ReadingFacts and figures