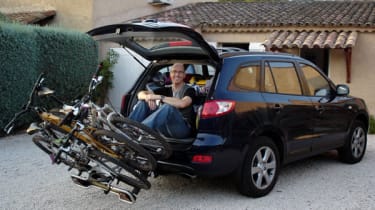 Holidays are the ultimate test for any family car. The challenge of trying to fit in two weeks' worth of supplies, then drive hundreds of miles, is guaranteed to push the abilities of any vehicle.

And that's particularly the case when you have so much kit it can't all be fitted in the car! There was no way that three mountain bikes were going to be able to share the cabin of our Hyundai Santa Fe with two adults and a pair of small children on my recent family holiday. Having discovered to my (financial) cost that putting bikes on the roof hits fuel economy hard, we decided to carry them out of the airflow, behind the car on a towbar-mounted rack.

This proved to be an inspired decision - no more panicking about height restrictions, and although you have to be careful when reversing, we had no trouble topping 30mpg, even with a full load on board. But the best bit about the Thule EuroWay 947 we used is the tilting function, which allows you to open the tailgate as normal.

Not only did the Santa Fe prove relatively efficient on our 2,100-mile round trip to the south of France, but the massive 80-litre fuel tank meant refills were more than 500 miles apart, while the cabin was spacious, comfortable and quiet. It also stood up very well in comparison to the Land Rover Discovery TDV6 I took on a virtually identical trip last year (see Issue 880). True, the Disco was bigger and more practical, but the fact the stylish Hyundai can be mentioned in the same breath as the Brit, which is £20,000 more expensive, says it all.

The 2.2-litre VGT diesel has loosened up a treat now it has more than 8,000 miles under its belt. What's more, the big boot was ideal for carting lilos, towels and buckets and spades to and from the beach, and the seven-seater's rearmost chairs raise and lower in a split-second.

However, there are drawbacks. There's no load cover, six-speed gearbox, rear parking sensors or one-touch electric windows. And Hyundai's cost cutting means the radio is hopeless. It doesn't have an RDS function to keep it locked into one station, so constantly needs retuning.

These are minor niggles, though, because on the whole the Santa Fe has easily exceeded my lofty expectations. The ultimate test of a family car? It passed with flying colours!

Second opinion Our Santa Fe certainly piled on the miles on Oliver's break, but I needed its load-lugging abilities for another reason. My trip from Surrey to Warwick carrying furniture, curtain poles and other items for friends who were moving house proved easy for the Hyundai. It wafted up the motorway in comfort, and used less than half a tank of diesel in the process.Lesley Harris, road tester