The Santa Fe majors on space, practicality and comfort, but the third row isn’t the most accommodating 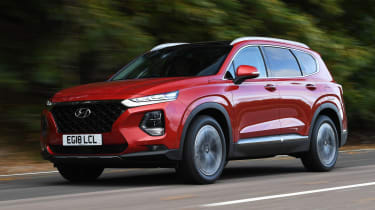 All Hyundai Santa Fe models come as standard with seven seats, much like its Peugeot 5008 and Skoda Kodiaq rivals – though the Nissan X-Trail can be had with a choice of five or seven. In this company, the Hyundai’s rearmost bench seems a little tight and is best suited to children.  By contrast, the Santa Fe’s front and middle-row seats are very roomy.

The driving position is excellent, especially in models further up the range with the fullest range of electric adjustment – it’s very easy to get comfortable behind the wheel. Visibility is similarly good for a car of this type; there’s a larger glasshouse than in the Peugeot 5008 and low-speed manoeuvring is made easier by the standard rear camera, or simpler still by the Premium SE's 360-degree camera system.

The Santa Fe is a practical proposition, not least thanks to its wealth of clever interior features. The glovebox is large, the cabin is strewn with useful cubby holes and in the rear there are two USB slots and a 12V power outlet for charging all manner of devices. Front and rear armrests are standard; the former boasts a storage compartment, while the latter has two cupholders. The front cupholders are well located and of a decent size – much better than those of the Peugeot 5008, which get in the way - especially in combination with a manual transmission.

The Hyundai Santa Fe is almost exactly the same size as its two closest rivals, the Skoda Kodiaq and Peugeot 5008. All three measure 4.7 metres in length, give or take a couple of centimetres; the Hyundai is the widest at 1.89 metres, while the Peugeot is the narrowest at 1.84m. The Santa Fe stands slightly higher than the Skoda (1.68 metres) and the Peugeot (1.68 metres) at a shade over 1.7 metres. Despite its size, the Hyundai is still relatively easy to maneuver in a tight spot. 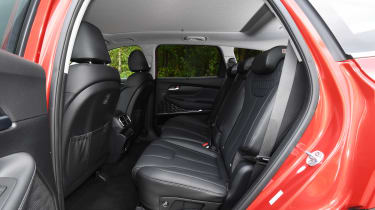 The Hyundai’s roofline gives enough space for luggage and third-row passengers, but the boxier Peugeot is probably slightly more practical in this regard. However, most family buyers will not be disappointed by the Santa Fe’s practicality, especially if the rearmost seats are only used for children or for adults over shorter distances.

There’s not much to complain about in the first two rows of seating – there’s ample space and adjustment in the front for even tall occupants to get comfortable, while the middle row can easily fit three adults abreast – a feat that’s made easier by a flat floor. The Santa Fe has a wheelbase that’s 65mm longer than in the old model and this equates to more kneeroom than before; headroom is ample too.

The Skoda Kodiaq offers more space to its rearmost passengers, but the Hyundai’s 3rd row seats don’t feel as tight as those in the rear of the Peugeot 5008. It’s pretty even in the middle row stakes, and unlike the Peugeot 5008, our top-spec model’s panoramic sunroof wasn’t intrusive for those over six feet tall.

Easily accessible ISOFIX points are provided in the front passenger seat and in the outer middle row seats only; by contrast, the Peugeot 5008 was one of the first SUVs to offer ISOFIX on all three of its middle row seats. The Skoda Kodiaq has two in the middle row, with a front-seat mount offered as an optional extra.

As with most cars in its class, the Santa Fe’s rearmost seats can be split-folded to lay flat and offer a large boot when not carrying seven passengers – 625 litres in this case. The third row seats are easily folded thanks to a pull-tag mechanism. 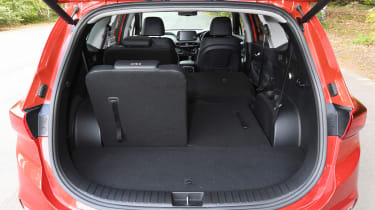 The middle row of seats split 60:40 and can be folded forward to give a total of 1,625 litres. The resultant space is a practical shape, with a wide, lipless opening to make loading heavier items easier. There’s also a luggage net and number of hooks to help keep things in place on the move.

The boot space on offer trails the boxy Peugeot 5008’s 780-litre boot when its rear row is folded; the Skoda Kodiaq offers 720 litres with the rear row folded and a colossal 2,005 litres with all five rears folded flat. The Skoda’s boot floor is also flatter and squarer than that of the Hyundai when both rows are folded.

The Hyundai Santa Fe has decent towing credentials, with standard trailer stability assistance and a trailer wiring package. The maximum braked trailer tow weight is 2,500kg in cars with a manual transmission, regardless of the number of driven wheels. Automatic models are limited to a maximum braked tow weight of 2,000kg. If you need an automatic tow car and have more than 2,000kg to tow, a Skoda Kodiaq with a diesel engine and DSG gearbox matches the manual Santa Fe’s 2,500kg braked limit.