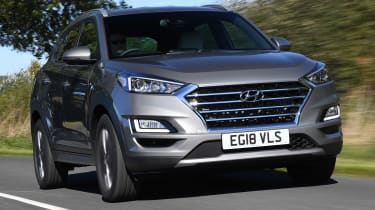 The Hyundai Tucson’s 48V tech arrives at the top end of the range, with an automatic gearbox, four-wheel drive and higher-end trim levels. This means it’s just too expensive to recommend - but the system shows plenty of promise for when it gets paired up with the cheaper 1.6 diesel in 2019.

Hyundai has been making great gains in electrification recently, with the Kona Electric winning our Affordable Electric Car of the Year for 2018. But the Korean manufacturer knows that it’ll have to make improvements on its combustion-engined cars too, so it’s rolling out ‘mild hybrid’ systems across the range – starting with the Tucson 48V.

The Tucson is a bit of a novelty, because while most brands are pairing electrification with petrol engines, Hyundai has mixed its 48V starter-generator with its 2.0-litre diesel engine. It uses an eight-speed automatic gearbox and four-wheel drive, and the result is a family SUV that can crack 0-62mph in 9.5 seconds. It’ll deliver fuel consumption of 49.6mpg on the tougher WLTP test cycle, too.

Yet CO2 emissions of 151g/km means a big VED hit in your first year; this is a mild hybrid with a 0.44kWh battery, which offers no ability to run on electric power alone. Look at the front-wheel drive 1.6-litre diesel if you’re totally focused on fuel economy. 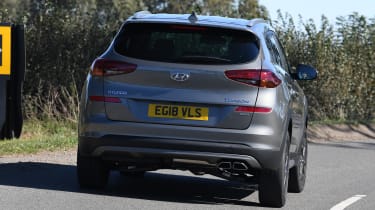 Instead, the 48V system cuts the engine slightly early as you come to a halt, safe in the knowledge that it has the electric power to get you moving again if you require instant acceleration. That aside, it supports the diesel motor for extra grunt, adding an extra 16bhp as required.

And it works pretty well in practice. Hyundai’s latest four-cylinder diesel is good at masking any trademark rattles and with the extra assistance of the hybrid power. As such, it never really feels strained unless you’re really flooring the throttle. The integration with the eight-speed auto is solid enough, too; it can get a bit confused if you demand very quick kickdown, but in general, you quickly learn to work with it to maintain relaxed progress.

It never feels fast, though, despite that punchy power output. The extra weight of the hybrid set-up and the four-wheel drive transmission also makes itself known if you try to throw the car around with any sort of gusto, too. The steering is nicely weighted but very short on communication, and the body has a tendency to lollop about through corners. It’s much more at home cruising along at speed, when that compliancy works in its favour to deliver a pretty unruffled ride. 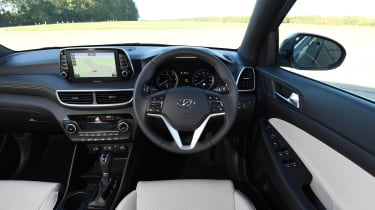 There is a bit of a hit on practicality with four-wheel-drive Tucsons, and the hybrid version takes another penalty beyond that. But even so, the flat-floored, well-shaped 459-litre boot should be enough for most families’ needs.

The rest of the cabin showcases the progress that Hyundai continues to make on dashboard design and finish, with a neat, functional layout that features an eight-inch touchscreen in the centre of the facia on all but the most basic trim levels. Every 48V model gets that big screen, in fact, as the hybrid tech is only available on Premium and Premium SE cars for the time being.

Our Premium model was well equipped, too. Sufficiently so for us to question why anyone would need to add the letters ‘SE’ on the order form. As well as that infotainment set-up, you get wireless smartphone charging, a pleasing mix of leather seat coverings and chrome flourishes, front and rear parking sensors (plus a rear-view camera), cruise control and a towing assist function.

Even this kit list isn’t quite enough to overcome the fact that the Tucson 48V is a near-£33,000 car, however. That nudges the smaller of Hyundai’s two family SUVs into premium territory – and the CO2 emissions and hefty list price mean it isn’t a steal on Benefit-in-kind either.

For now, then, we’d say the best way to enjoy the benefits of the revised Tucson are further down the range, where you get better efficiency, slightly less compromised practicality, and notably stronger value for money.