Warm version of the premium Infiniti Q30 hatchback brings a step up in pace, but at a price 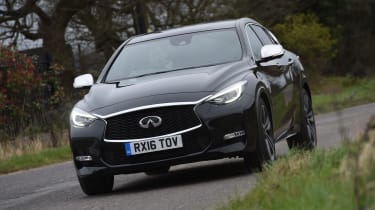 The Q30 Sport may appeal to some who want a brisk and distinctive small premium hatchback, but it’s priced to compete with serious performance models. An Audi S3 is more practical and usable, while a BMW M135i is far more engaging, and both are considerably quicker. And if you’re not interested in speed, we can’t really see why anyone would buy this thirsty and poor-value model over a Premium-spec diesel.

Infiniti has all the tools to take on the premium German hatch establishment with its new Q30, but it’s yet to offer a true performance model to compete with them. Those after a bit more oomph will have to settle for this, the Q30 Sport.

While it’s essentially just a trim level, it does bring the option of a 208bhp 2.0-litre four-cylinder turbo petrol – the most powerful engine available in the Q30 in the UK – and we’ve driven it for the first time.

This is the same engine as in the Mercedes GLA 250 crossover; it produces 350Nm of torque, firing the Q30 from 0-62mph in 7.3 seconds, and comes fitted with a seven-speed dual-clutch gearbox and four-wheel drive as standard. This looks like adequate performance on paper, until you consider that almost every rival will sell you something far quicker at this price level. 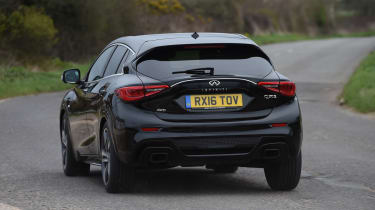 Figures aside, it’s an engine that’s all about flexibility. Peak torque is available from just 1,400rpm, meaning you don’t need to rev too hard to get the best out of it. That’s just as well, as there’s not much performance gain in doing so and it sounds more strained than sporty. At least the auto gearbox’s upshifts are quick, helping it feel brisk in the mid-range. The Q30 shifts smoothly in auto mode, too, but reacts lethargically from a standing start or around town, while there’s no happy medium between the economy-biased E and frenetic S modes. BMW or Audi can sell you a slicker self-shifter, and it’s a pity Infiniti doesn’t offer a manual option, either.

The regular Q30 is more comfort-focused than the A-Class on which it’s based, but Sport spec brings lower, stiffer suspension, bigger brakes and sharper steering.

Body control is marginally tidier and it stops with confidence, but it’s still a world away from the agility that the Volkswagen Golf R offers. Similarly, while the steering is weighty and accurate, the Q30’s all-wheel drive just doesn’t prevent understeer or make it feel that tied down. Furthermore, while the regular model is very smooth, this version thumps into potholes more sharply (like the A-Class). 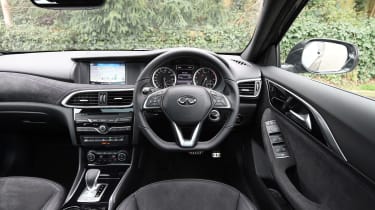 Exterior upgrades for the Sport are subtle, and include purple-detailed 19-inch alloys and beefed-up bumpers to go with that lower ride height. The array of curves isn’t to all tastes, but there’s no denying the Infiniti is more distinctive than rivals.

Inside, only the black headlining and part-Alcantara seats mark out the Sport, and most materials are plush and premium enough for this class. However, our test car suffered from a variety of rattles, while the dark trim, small windows and chunky pillars make it feel tight in the back. Plus, with the optional Tech Pack (adding sat-nav and the Around View Monitor), this Q30 is an eye-watering £34,890, and the 2.0 turbo isn’t predicted to hold on to its value well.