The new premium hatch is built in Britain, so we see if it makes sense on our roads 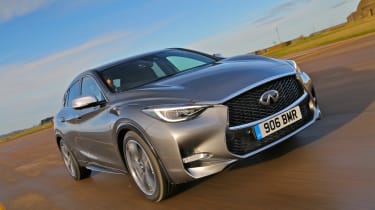 The new Infiniti Q30 can’t match competitors such as the Audi A3 for quality, driving dynamics or low emissions, but it’s certainly worth a second look. The bold styling allows it to stand out from the crowd, while a supple ride and decent refinement make it extremely easy to live with. This all-wheel-drive model is expensive to buy, but the lower-specification, two-wheel-drive SE and Premium versions are cheaper and represent decent value.

Infiniti’s currently a bit player in the UK, but it’s hoping to hit the big time with its latest arrival, the Q30. Pitched squarely at the lucrative premium compact hatch class, the newcomer aims to blend style, quality and low running costs into one desirable, British-built package.

Yet while this is Infiniti’s first attempt at a family hatch, it won’t be a complete leap into the unknown. That’s because the Q30 uses Mercedes A-Class underpinnings. We’ve tried the car on European roads, but now we’ve driven a 2.2d Premium Tech AWD DCT to see how it measures up in the UK. 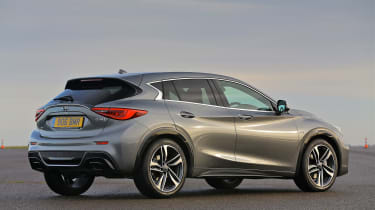 While the Q30 is a Mercedes under the skin, externally it’s pure Infiniti. Featuring a bold mix of curves and creases, plus a subtly raised height, it looks like nothing else in the class. Its daring design won’t be to all tastes, but it attracts plenty of attention.

Inside, the Q30 is far more conventional, and it doesn’t take long before you spot the Mercedes hand-me-downs. The steering wheel, dials, ventilation controls and minor switchgear are all A-Class, as is the key. And while most materials are of a high quality, the cabin doesn’t look or feel as upmarket as an Audi A3’s. Still, there’s decent space and a roomy 430-litre luggage area.

Mercedes’ help extends to the use of its tried-and-tested 2.1-litre diesel. Excellent insulation and sound-cancellation software that uses the car’s stereo speakers mean the four-cylinder unit is subdued at idle and doesn’t intrude when extended. 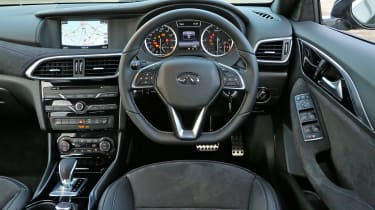 With 168bhp on tap, performance is brisk (Infiniti claims 0-62mph in 8.5 seconds), but the Q30 trails rivals such as the BMW 120d. However, the combination of 350Nm of torque and a seamless seven-speed twin-clutch gearbox (a first for Infiniti) means the newcomer covers ground deceptively fast.

Even so, this refined car is at its best when taking it easy. The suspension has been tuned for comfort, so the Q30 does a good job of soaking up bumps, with only the occasional pothole upsetting its composure. Wind and road noise is well suppressed, too, while the engine settles down to a barely audible hum at a cruise. 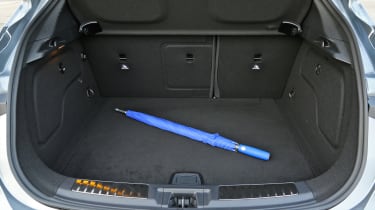 The Q30 also makes a decent fist of corners. Its steering lacks any real feel, but it’s precise and the Infiniti clings on gamely through bends, thanks in part to this model’s electronically controlled four-wheel-drive system. It’s not as engaging as a BMW 1 Series, but it’s composed and capable.

At £31,180, our Premium Tech trim test car isn’t cheap, while its CO2 emissions trail those of the class leaders. On the plus side, it’s well equipped; you get powered and heated seats, climate control, lane-departure warning and a reversing camera as standard. Opt for the two-wheel-drive version to save £1,550 and cut CO2 emissions to 116g/km.