We try the striking Q30 premium hatchback with the cheaper 1.6 turbo petrol engine 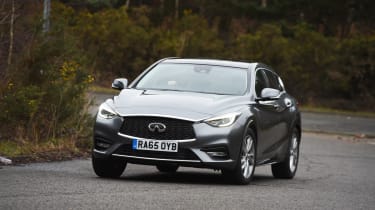 The Infiniti Q30 is certainly worth considering if you're after a premium family hatchback, and this petrol model is refined and comfortable. The diesel versions better suit the car's character, though, and the significantly better economy figures will swing it for the majority of buyers. Still, for those who only do short journeys this version has its merits – and there's plenty of space inside for the school run.

We were impressed by the new Infiniti Q30 when we drove it in the UK for the first time earlier this year. That car was fitted with the punchy 2.2-litre diesel engine – but now we've had the chance to try the cheaper 1.6-litre petrol model on British roads.

The turbocharged engine is quiet at idle and near-silent while cruising, which really suits the Q30's relaxed nature. The supple suspension set-up and comfortable seats make motorway trips a breeze, and there's enough torque at low revs to overtake without having to change gear too often. 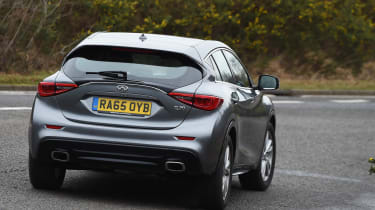 With 120bhp available at 5,000rpm this Q30 isn't particularly fast, but the engine note isn't too harsh and the sound deadening means it's not unpleasant accelerating up to speed. The manual gearbox is easy to use, but the lever does sit high up on the centre console which can make it a little awkward if you have the driver's seat in its lowest position.

Unfortunately, taller drivers will almost certainly need the seat touching the floor, as with the optional sunroof as fitted to our car, headroom is a real issue. It's an even bigger problem in the back, where passengers over six-foot tall will have to sit with a crooked neck. There's loads of legroom back there, though - and the seats are comfortable, too.

Cruising on smooth roads is where the Q30 shines, but it does soak up lumps bumps in British roads very well too, and it's surprisingly good to drive when things get a bit twistier. There's a little more body roll than the stiffer Mercedes A-Class it's based on, and it's not as fun as a BMW 1 Series, but the Q30 is grippy and doesn't feel out of its depth through a fast corner. 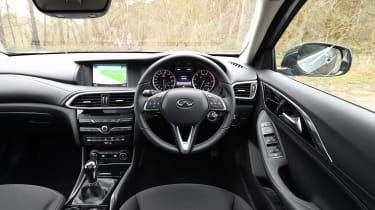 The Infiniti's cabin is full of Mercedes switchgear, and the screen in between the dials is particularly impressive. It does show up the rather small and low-res central screen, though. The user interface for the infotainment system is easy to understand, which is crucial to keeping the car's relaxed atmosphere. This Premium-spec model has cloth seats, but they manage to retain the upmarket feel created by the soft materials around the cabin.

With its divisive looks the Q30 won't be for everyone, but it certainly stands out. The high shoulder line means it feels bigger on the road than it actually is, though, and that small rear window means backwards visibility isn't great. You'll have to add the £1,060 Tech Pack to get a reversing camera, too. 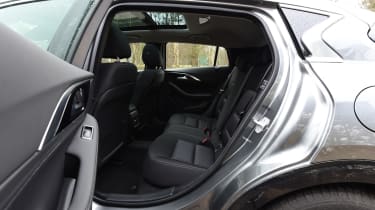 Even lower-priced Q30 models have plenty of other equipment, though, with the Premium specification getting dual-zone climate control, LED lights, auto braking, cruise control, lane departure warning, Bluetooth, a touchscreen display and auto lights and wipers. The 1.6t petrol model is refined and economy of 47.1mpg isn't bad, but we'd still recommend the 1.5-litre diesel, as it will return an impressive 68.9mpg while being nearly as powerful and almost as refined.