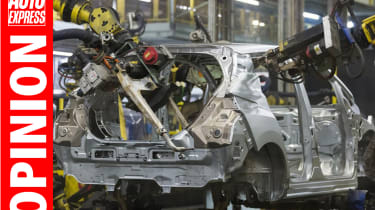 It was great to see the British motor industry up where it belongs a few days ago: at the top of the news agenda, making the headlines in mainstream papers, creating lead stories for broadcasters, plus attracting the attention and respect it deserves from commentators, analysts and politicians.

True, some of the developments have been declared discouraging, if not disastrous. The best/worst example of this is “just £347.3million earmarked for new models, equipment and facilities in the UK” during the first six months of 2018, according to the Society of Motor Manufacturers and Traders (SMMT). But hang on, this is £347.3m or almost £2m per day more than most countries invested in auto industry projects over the same period.

Looking at the wider, more important picture, current figures show that Britain still has at least 75 car manufacturers (six mainstream, eight premium/sports and 60-plus specialists). As far as I know, none has lately said it’s closing down here and defecting to another country. And the same goes for our dozens of engine, CV and PSV manufacturers.

“You’re right, no one has shut up shop yet,” the SMMT assures me. “And we’re keen to ensure that doesn’t happen.” Glad to hear it. I’m equally delighted that we continue to export to around 160 markets; some, incidentally, inside Europe, the vast majority not. It was ever thus, and always will be. If there’s another small country that boasts better numbers than all those I’ve touched on above, I’m not aware of it. It gets better still.

UK automotive turns over £80billion-plus annually and officially employs 800,000 to 900,000 people in mostly well-paid, good-quality, skilled jobs. Jaguar is investing £14billion over the next three years, just in EVs.

Contrary to what you might’ve assumed, since Britain voted to leave the European Union, motor industry employment levels here have, according to SMMT stats, increased to around 856,000 people. Factor in all the workers, including those on the outer fringes of the auto sector, and I reckon the true figure is in excess of one million. Without this colossal army, together with the essential income tax and NI contributions that they make, HM Treasury would be on its knees and the unemployment numbers through the roof.

When a BBC reporter claimed on the TV news last week that the British motor industry is in reverse gear, he ignored the many irrefutable facts and figures which prove it is, in many respects, moving forwards. Never forget that we remain one of the world’s top small countries for car production. And that’s not going to change anytime soon... if ever.

Enjoyed Mike's column this week? Then why not take a look at last week's where Mike argued to free up or roads we should drive smaller cars...