The Jaguar Project 7 is an F-Type-based one-off pays that homage to fifties D-type. And we drive it 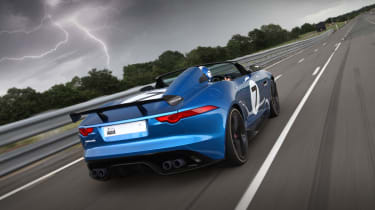 It’s a shame Jaguar has no plans to put the Project 7 into production, especially when it’s this exciting to drive and jaw-dropping to look at. Admittedly, with no boot and no roof, it’s not the most practical car, but collectors would surely snap them up. And even as a one-off study, it proves that Jaguar is perfectly in tune with its rich heritage, rather than pillaging it, and that the design department is in its best form for years.

Eight weeks. That’s all Jaguar gave itself to turn the Project 7 from a doodle in a sketch book to the tyre-smoking star of the Goodwood Festival of Speed last month. And given the quality of the finish, it was quite an achievement.

The one-off is based on the F-Type V8S, but inspired by the D-type racer from the fifties. And before you ask, there are no plans for production. The good news, though, is that Jaguar threw caution to the wind and decided to let us take it for a spin.

The standard F-Type is already a stunner, but the Project 7 takes its beauty to another level. With a 10mm drop in ride height, plus a carbon fibre front splitter, wing and side sills, and those incredible carbon blade alloys, it effortlessly blends aggression with elegance. The fin behind the driver’s head draws the parallel with the D-type (and helps reduce the drag caused by the driver’s head), while the chopped down windscreen visually lowers the car further.

We climb in, taking care not to tread on the brittle carbon sill, and drop further than expected into the unique bucket seat – mounted 50mm lower than normal. We clip ourselves into the four-point harness and push the start button, which detonates the 5.0-litre supercharged V8. Then the nerves begin to set in: What if we crash this priceless concept? What if we kerb a wheel?

There’s another factor playing on our minds; this isn’t just the standard V8. Jaguar has plumbed in the recalibrated version found in the XKR-S, which sends 545bhp (57bhp more than the standard car) to the rear wheels through a quicker eight-speed auto gearbox. And then it starts to rain.

The photos shown here were taken the previous day, but when we get out on the track there’s standing water everywhere. It means on the straights we get to feel the engine’s full force, but the corners are taken at a more sedate pace.

Even so, the electrifying performance is obvious from the off. In normal mode, without the sharpened throttle response, the Project 7 snaps forward with even the faintest brush of the throttle. Use more of its travel and the acceleration is breathtaking. At one point we hit a puddle and start to aquaplane at 130mph – a real heart-in-mouth moment.

In corners the steering is just as sharp and the brakes just as strong as the standard model’s, but without any sound regulations to adhere to, the switchable exhaust makes an even more raucous noise. There’s a guttural roar under acceleration and it sounds like a firework display on the overrun.

At one point, we take a brave pill and engage Sport mode, which slackens the ESP’s safety net and firms up the adaptive dampers. There’s a tangible difference when you hit the occasional bump, but on a flat race track the improvement in body control is more noticeable than the deterioration in ride quality.

For a one-off concept car, the Project 7 feels incredibly polished, but that’s hardly a surprise. Its aero package was tuned in the wind tunnel, while the chassis settings were honed by Jaguar handling guru Mike Cross. According to design director Ian Callum, the car “opens up an insight as to where the F-Type could go”. So it could point the way towards a more powerful F-Type R – with the same engine, gearbox and lower suspension height – in the near future. You heard it here first.