2018 is the year Tesla will cease to have things its own way, with Jaguar the first brand aiming for a slice of the premium all-electric market.

The I-Pace SUV is set to be in showrooms in mid-2018 and Auto Express was invited on one of the car’s final testing sessions in California. The broken and busy streets of West Hollywood are ideal for an assessment of a pre-production car, built in the new I-Pace factory in Graz, Austria.

We’re invited to sit alongside powertrain programme manager Simon Patel, who tells us that I-Pace has already undergone 1.5 million miles of testing. And although this is a version of the car you’ll be able to buy, Jaguar is remaining coy on power output. Reading between the lines, it’ll be pretty close (if not identical) to the concept car’s 395bhp and 700NM of torque from its 90kWh battery and two electric motors – one on each axle. 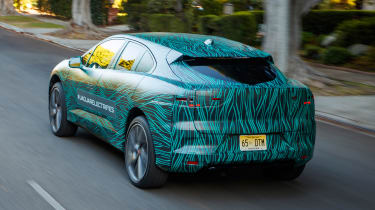 From the moment Patel accelerates away from Mel’s Diner on Sunset Boulevard, it’s clear this car is production-ready and very quick. It also lets out an infectious whine with the note rising as the car accelerates – not unlike Jaguar’s Formula E racer.

“Quite a bit of effort has gone into the noise to avoid something annoying and turning it into something more pleasing,” says Patel.

Apparently working on noise, vibration and harshness has been one of the biggest challenges his team has faced, given the apparent amplification of some noises due to the silence of the electric motors. “We have to get the level of refinement expected of a Jaguar,” Patel tells us. 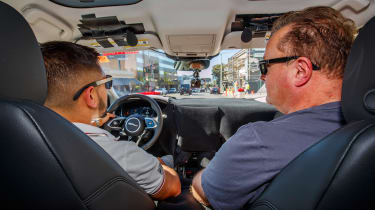 And although this car runs on 22-inch wheels, the ride is on the sporty, rather than harsh, side of firm – there’s still a fair degree of comfort from the continually variable dampers and air suspension and the car reacts swiftly to Patel’s sudden tugs on the steering wheel, mimicking going through a quick chicane, yet keeping the body flat and controlled.

The car runs in four-wheel drive all of the time, but can vary the ratio of power to each axle. And the push-button drive selector offers two modes: one that apes an internal combustion engine’s acceleration and cruising, and one that provides more engine braking so you can effectively drive the car on one pedal.

And as Patel sees a gap open up along Rodeo drive, he floors the throttle and we instantly get wedged back into our seat to feel the brutal force of all-electric acceleration – the concept claimed a 0-60mph time of 4.0 seconds and that feels conservative. 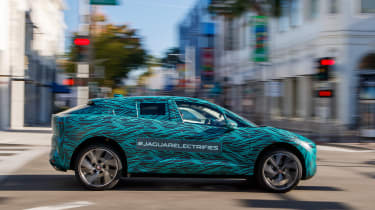 When we re-gather our composure, we get to look around inside what is an SUV with similar leg and headroom to an E-Pace, but with an airier feel in the front due to the big glass windscreen. Visibility out of the back looks a little compromised, though.

And although there’s thick black cloth covering the dash, we can glimpse plenty of black glossy surfaces mixed with metallic elements to give a futuristic but classy feel inside.

The covers will come off next March when prices will be announced and order books opened, in advance of deliveries mid-year. With prices expected to start at around £60,000 and on the basis of our ride in this production-ready prototype, we’d expect Jaguar dealers to be very busy. And Tesla retailers to start getting a little twitchy.