Special-edition coupe is quickest Jaguar to go on sale since XJ220. 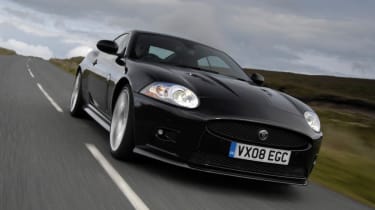 The XKR-S is enormously accomplished. It’s simply fabulous to drive, with a storming V8 engine and a fine blend of handling and ride comfort. But rather than being a big leap forward over the XKR on which it’s based, this latest Jag is a subtle step. At nearly £80,000, it’s expensive, too – and that takes the edge off the overall package.

Jaguar’s new XKR-S supercat has quite a pedigree. With a top speed of 174mph and looks to match, it’s the quickest Jag to go on sale since the legendary XJ220 supercar – and the firm’s fastest-ever coupé!

Developed by a small team of engineers, the XKR-S benefits from a host of suspension modifications, plus uprated brakes. And the speed limiter has been removed from the 420bhp 4.2-litre supercharged V8, so the model can accelerate far beyond the 155mph cap Jaguar normally places on its cars. Only 200 examples will be available worldwide, with 50 in the UK. At £79,995, the Jag costs £9,000 more than the XKR on which it’s based, so it’s sure to be exclusive – and has the looks to match.

Those aero parts reduce drag and help to cut lift, making the new Jag more stable at high speed. Inside, XKR-S branding adorns the steering wheel and seats, while a revised instrument cluster features a fresh speedo to reflect the raised top limit. A Bowers and Wilkins stereo system has been specially tuned for superb sound quality.

Plenty of talent has been deployed on the chassis, with head engineer Mike Cross and chief programme engineer Russ Varney both heavily involved.

They have focused on giving the car a bit more of an ‘edge’ without ruining the comfortable ride and finely judged handling balance which marks out the XKR. Their changes include stiffer springs, dampers and anti-roll bars, while the steering rack is 10 per cent faster and the ride height 10mm lower.

There are also superb race-developed Alcon brakes with 400mm (front) and 350mm (rear) ventilated discs – these are the most powerful anchors ever fitted to a Jaguar.

On the handling front, the new machine feels similar to the standard XKR. It rides a little firmer, while there’s slightly more precision to the steering and less roll in corners. The supercharged V8 is a beauty, as is the six-speed gearbox, which gives smooth changes in auto mode. There are steering wheel paddleshifters, too.

Yet the XKR-S isn’t that much of a leap over the XKR. Buyers not chasing ultimate exclusivity would be better saving £9,000 and ordering the regular version.

Rival: Maserati GranTurismo S It sounds harder and goes faster than the standard car without sacrificing comfort, and has one of the fastest-shifting gearboxes around. The £89,900 Maserati doesn’t disappoint.