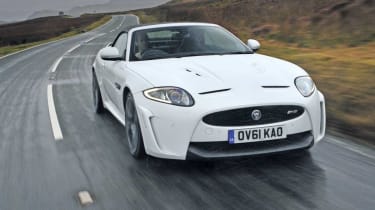 The XKR-S Convertible looks fantastic and delivers great performance, but it’s very similar in character to the standard XKR. The relaxed power delivery and subtle suspension tweaks make it a more potent GT than before, and its more aggressive looks and sound will be enough to convince some buyers, but we think it’s an expensive choice. Then again, the Aston Martin DBS Volante and Mercedes SLS-AMG Roadster cost a lot more...

If you want to banish the winter blues and have £103,000 burning a hole in your pocket, Jaguar has the perfect answer. The XKR-S Convertible is the fastest drop-top the company has ever produced and can hit an incredible 186mph, but is it worth its eye-watering price tag?
You could argue that Jaguar has timed the launch of its new cabriolet to perfection: it coincided with the onset of some proper winter weather, which was the perfect way to demonstrate the quality of the car’s fabric hood. On the wintry Welsh roads of our test drive we had the roof up for much of the time, and it makes the cabin as quiet and cosy as the coupe’s.

Video: watch our video review of the Jaguar XKR-S Convertible
[[{"type":"media","view_mode":"content_narrow","fid":"68806","attributes":{"alt":"","class":"media-image"}}]]
Still, it’s only when you drop the hood that you really begin to understand the appeal of the XKR-S Convertible, because retracting the fully automated roof puts you even closer to the elements... and the car’s intoxicating exhaust note.
The distinctive low-end burble of its supercharged 542bhp 5.0-litre V8 erupts into a roar as the revs rise. And as the scenery blurs, the noise – which ricochets off roadside walls and bounces off bridges – adds another layer of enjoyment to the XKR-S driving experience. Performance is identical to the Coupé’s, even though the roof mechanism adds 42kg to the kerbweight.
From a standing start, it sprints to 60mph in 4.2 seconds and has the same quoted top speed as its tin-top cousin. Better still, the Jag was designed from the outset to be a convertible so it feels incredibly stiff, with no sign of scuttle shake.
Reworked electrics and a new exhaust system account for the extra 39bhp the flagship has over the regular XKR, but the engine isn’t the only thing to have changed. Its new nose and bold rear spoiler are designed to improve the aerodynamics, and they give the XKR-S a more aggressive look into the bargain.
The chassis settings have also been given a rethink, with tweaks to the design of the suspension, stiffer springs and dampers, plus lighter alloy wheels and improvements to the steering.
If that list suggests the XKR-S Convertible has morphed into a tautly sprung track car, think again. Instead, it stays true to Jaguar’s roots, providing effortless acceleration and impressive comfort for a sports car with this much performance. Think of it as a faster, slightly  more focused XKR Convertible and you won’t be far wrong.
Sharper body control, plus changes to the steering, make the Jaguar more accurate and precise than ever. You can thread it along narrow and twisty country lanes with real confidence.
So it’s very fast and a lot of fun – but is it worth £18,450 more than the XKR Convertible? As an extension of the XK range, the car doesn’t offer enough on top of the standard version to justify the extra. If you can afford a roadster with pace to match the XKR-S, you may want to dig deeper into your pockets for a more luxurious rival.
Share this on TwitterShare this on FacebookEmail