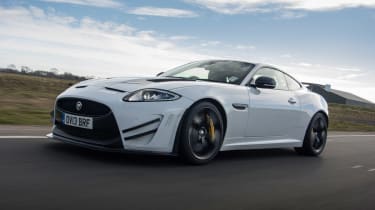 Limited numbers assure the Jaguar’s rarity, plus it sounds thunderous and has sharp handling and blistering performance. Yet the wild looks won’t be to all tastes, and the Jaguar XKR-S GT can feel extreme on the road, particularly in slippery conditions.

Jaguar’s trophy cabinet is brimming with awards, with seven Le Mans wins and numerous Formula One outings to its name.

However, this on-track success hadn’t filtered down to the company’s road cars. The Jaguar XKR and R-S models have added some high-performance appeal, but none has had the hardcore focus of the Porsche 911 GT3.

Until now, that is. The sensational Jaguar XKR-S GT is the first model to come out of Jaguar’s new Engineered To Order (ETO) division, and it distils all the manufacturer’s racing know-how into one intense package.

Just a short drive in the XK is likely to result in sensory overload. It’ll be the noise that hits you first. Even at idle, the burble from the Jag’s quad-exit exhaust will cause window panes to rattle, while above 3,000rpm the supercharged V8 sounds like a low-flying Spitfire. Lift off the throttle and you’re treated to an addictive symphony of pops and crackles on the overrun.

As you’d expect, this big cat has the claws to match its roar, despite delivering no more power than the standard XKR-S. With a muscular 680Nm of torque at only 2,500rpm, it has the upper hand over the high-revving Porsche 911 GT3 during in-gear tests. Better still, its smooth-shifting six-speed automatic is very responsive. 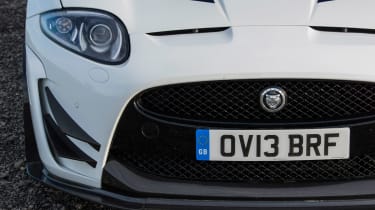 But it’s the extensive changes to the XK’s suspension that reap the biggest rewards. At the front there’s a 52mm wider track, increased camber and a quicker steering rack, while the rear axle is based on the forthcoming F-Type Coupé’s. And that’s not all, because the adaptive dampers are now height-adjustable, while the front and rear springs are 70 per cent and 25 per cent stiffer respectively.

On the move these changes transform the XK, particularly in dry conditions. For instance, there’s plenty of front-end bite when you turn into a corner and the revised steering is well weighted and full of feel. Body control is first-rate and the sticky Pirelli P-Zero Corsa tyres offer bags of grip. And as with the standard car, the rear-wheel-drive GT’s line through a corner can be adjusted using a combination of steering and throttle.

The Jag feels less reassuring in slippery conditions, when the traction control has to work overtime to keep the wheelspin in check. And while it seems more engaging and focused on-track than the Aston, it can’t match the 911 for razor-sharp responses and ultimate ability.

Despite its wild looks, the XK is actually a surprisingly comfortable road car. The ride is always firm, and big bumps send a shudder through the cabin, but it smooths out at speed. And the combination of lusty V8 and slick auto provides effortless progress. 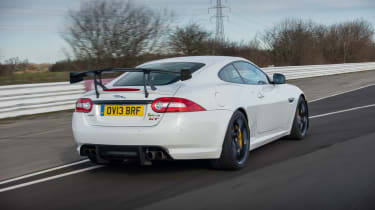 With its huge rear wing, neat bonnet stripes and prominent front splitter, the GT is unlikely to be mistaken for any ordinary XK. If anything, the Jaguar looks even more aggressive than its Porsche rival.

Weight-saving carbon fibre is used extensively for the racy body additions, including the turning vanes mounted below the headlamps, deep rear diffuser and door mirror housings. Other high-performance additions include the gloss-black 20-inch alloy wheels and upgraded carbon-ceramic brakes, which boast huge 398mm discs at the front and 380mm items at the rear.

While the car’s exterior has been beefed up in the name of performance, the interior has been on a crash diet. The standard XK dashboard remains unchanged, but therear seats have been ditched in favour of a rollcage, while the driver and passenger get low-set, lightweight racing bucket seats complete with four-point harnesses. In all, 40kg has been saved, although the GT still tips the scales at a hefty 1,713kg.

Other neat additions include a suede-rimmed steering wheel and tactile metal gearshift paddles in place of the standard car’s cheap-feeling plastic items.

At £135,000, the XK is over £30,000 more than the Porsche 911 GT3. Still, that buys you exclusivity, as Jaguar currently plans to build only 20 right-hand-drive examples. And while residuals haven’t yet been calculated, its collector’s item status means value is unlikely to plummet.

Even so, the Jag won’t be cheap to run. In our hands it returned a thirsty 15.9mpg, while CO2 emissions of 292g/km mean hefty tax bills. Use it on a track, and you’ll need to budget for replacement tyres and brake pads.

For an in-depth buyer's guide on the Jaguar XKR from Classic and Performance Car click here...