We get behind the wheel of the fastest-ever Jaguar convertible, and it’s also its most expensive model 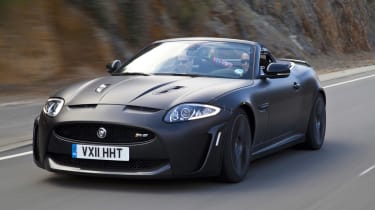 The range-topping Jaguar has the style, performance and quality to compete. It sounds magnificent with grip and poise to complement the power, although we’d prefer a touch more steering feel. Its big failing lies in a price that pushes the XK too far – looks apart, the S doesn’t do enough to justify its price tag, especially with such talent around for less, including the standard XKR.

The Jaguar XK was developed as a coupe and convertible from the outset, so it was only a matter of time before the drop-top version of Jaguar’s range-topper saw the light of day.
You can order an XKR-S Convertible now, with deliveries expected to start in early 2012, but you’ll have to stump up a sizeable £103,000 for Jaguar’s fastest-ever soft top.
At least Jaguar is consistent – convertible XK’s are always £6000 more than their hard top brethren, but there’s no difference in terms of performance – the top speed is still 186mph, with a 0-60 time of 4.2seconds.
Because the coupe and convertibles were developed alongside each other, there’s no additional (heavy) stiffening needed when the roof is lopped off. Instead, the only weight gain is 42kg due to the electric motor for the fabric roof.

The mechanical changes that elevate the XKR to XKR-S are identical – revised electronics and exhausts boosts the power of the 5.0-litre supercharged V8 from 503bhp to 542bhp, plus there are changes to the steering, rear suspension, Active Differential and Adaptive Damping to make the S models even more focussed.
The design team has done a fantastic job of upping the excitement and giving the S a look of its own: a low front splitter (painted black, as is the grille) and menacing air scoops at the front, while a diffuser, carbon-fibre rear wing and quad exhausts do the job at the back.
We drove a development XKR-S Convertible through some of California’s twistier roads, and the car certainly feels more alert with even greater traction and stability – just as the coupe does.
It also makes the same sensational noise, making roof-down motoring all the more essential, especially if there are tunnels to drive through. On start-up you get a delicious growl that settles down into a menacing burble. On the move, drop a couple of gears, floor the throttle and enjoy a hair-raising, deep-chested bellow that rises to a full-blown roar.
It’s quick, too – the big rear wheels provide bags of traction and the power just keeps on coming. Given the car’s size and weight, Jaguar’s engineers have made the car feel smaller and more nimble than it should. The six speed auto gearbox could be quicker to react – another ratio or a double-clutch ‘box would do the trick – while the steering lacks the sensitivity of a Porsche 911. The S still feels more GT than sports car.
That said, there are fewer compromises than in many other sports car. The ride is firm, but not teeth-wobblingly so, while the cabin is beautifully trimmed, handsomely equipped and generously proportioned. There’s a proper boot, too.
The biggest problem, though, is the price. A Jaguar costing over £103,000 has to be very special indeed. An XKR Convertible at £84,550 is a special car. The way the XKR-S looks might be worth the extra £18,450, but the way it goes doesn’t quite justify the extra, especially with talent like the Audi R8 Spyder around for over £8000 less.
Share this on TwitterShare this on FacebookEmail