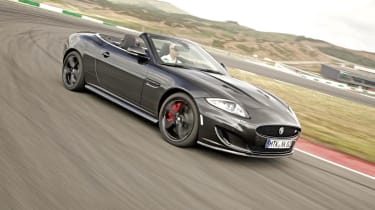 We’ve always loved Jaguar’s sporty XK, and this is the best incarnation yet. The facelift gives it a family resemblance without turning it into a clone. The front is far more dramatic, while the side vents fit perfectly. As ever, the drive strikes a near-perfect blend of comfort and performance. Add a greater colour choice, and a tweaked cabin with a wider range of materials, and the only thing not to like is the higher price.

Advertisement - Article continues below
While the XFR gets a new, more aggressive look, Jaguar has chosen the route of evolution rather than revolution with its revamped XK. The major changes are at the front, where the six-year-old sports car boasts all-new headlamps. These are slimmer by 15mm and also feature LED running lights.
They combine with a slightly larger oval grille. On regular models this will be finished in chrome mesh, but on the XKR we drove it gets a mean black look. The scoops feeding air to the brakes are also emphasised with a chrome surround.
At the sides, the vertical vents where hot air exits have been replaced by horizontal variants wearing the Jaguar name. These now characterise the marque’s cars. New LED lights grace the rear and, for the first time on an XK, Jag’s iconic leaper appears, so this model now comes into line with the rest of the range.
The overall effect is subtle, but achieves bosses’ goal of bringing the car up to date. It also gives the illusion of the XK appearing longer, lower and sleeker, even though no bodywork aside from the nose has changed. Inside, the car features the same rising gear selector on the centre console as the previous model. And for the first time you can specify figure-hugging bucket seats as an option.
Advertisement - Article continues below
New trim finishes give owners more personalisation options.
Mechanically the XK is identical to its predecessor, which means the R model still features an aluminium supercharged V8. That’s no bad thing: from the cockpit you continue to get the delightful woofling sound from the exhaust, which is exaggerated when the roof is down.
A nudge on the throttle makes the car leap forwards in a way that instantly grabs the attention. There are also apparently endless reserves of torque, which mean the XK is a relaxing machine in which to potter around town.
Criticisms? The six-speed automatic transmission is now starting to feel its age compared to quicker-shifting systems. The plastic steering wheel-mounted paddles seem a bit toy-like, too.
But all this is soon forgotten when you take the Jaguar to your favourite stretch of road, and the sheer breadth of the R’s talents comes into focus. Turn-in to corners is still pin-sharp, yet the ride is comfortable and the body is so well controlled that the car feels extremely agile.
Advertisement
Share this on TwitterShare this on FacebookEmail
Advertisement