Luxurious, fast and comfortable, the supercharged Jaguar XKR Convertible has it all 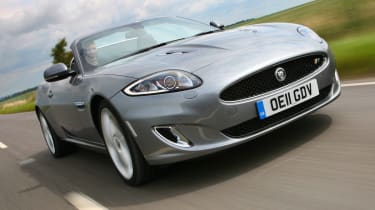 The Jaguar XKR Convertible is an incredibly fast grand tourer - and thanks to an electric folding roof, you can soak up the sunshine and hear even more of its amazing supercharged V8 engine. It's more involving than a Mercedes SL63 AMG and better looking, and if it had more rear seat space, it could challenge the much more expensive Maserati GranCabrio. It's expensive to run, though.

Power comes from a mighty 503bhp 5.0-litre supercharged V8, which rockets the XKR Convertible from 0-60mph in 4.8 seconds. It's both more powerful and faster than the £98,200 Maserati GranCabrio – and could almost keep up with a Mercedes SLS AMG. With the roof down, you can also enjoy more of its rumbling soundtrack, which makes the hairs stand up on the back of your neck. Through corners, the XKR Convertible feels as planted as the Coupe, with no shake through the windscreen and sharp steering. Those adaptive dampers allow for tight body control and fast reactions in the bends, but a supple and relaxing ride when you aren't going fast. In fact, it's a brilliantly comfortable long-distance cruiser. There's not too much buffeting at motorway speeds with the roof down – with it up it's almost as quiet as the Coupe.

With a price tag of £84,500 the XKR Convertible has a long way to fall - and deprecation will be shocking. A Mercedes SL63 AMG isn't much better but does hold onto more of its value. That big V8 is also very thirsty - you'll be lucky to get more than around 23mpg on a regular basis, while CO2 emissions of 292g/km mean big tax bills. As with any powerful luxury car, servicing will be expensive, while consumables like tyres will also require deep pockets.

The designers of the Jaguar XKR Convertible say they actually styled it first before stating on the Coupe, which explains why it looks so good. The XKR adds bonnet vents, a mild bodykit, 19-inch alloys and XKR badging to the stunning sporty shape of the XK. The electric folding roof is made of three layers of Thinsulate material and can be ordered in a variety of colours including grey, beige, green and burgundy. When stowed, which takes just 18 seconds, it fits beneath a neat tonneau cover. The Jaguar XKR Convertible has a beautifully constructed and luxurious interior. Everything is covered in quality hides and woods, while XKR models add metal trim and XKR badging.

The XKR Convertible obviously doesn't get a hatchback like the Coupe, and the roof mechanism does eat into boot space by a few shopping bags – however with 313 litres of load area, you will be able to fit a couple of golf bags. The back seats are best used for extra storage too, as they are so small that only very small children will fit. The front seats are very supportive and it's easy to find a comfortable driving position thanks to electrical adjustment of the seat itself and steering wheel. XKR models are well equipped with sat-nav, a six-CD in-dash changer, Bluetooth and active dampers.

The Jaguar XKR Convertible is a very safe car. It has lots of airbags, traction and stability control along with a pop-up pedestrian-protecting bonnet. In the event of a roll-over, two aluminium hoops pop up to protect the occupants. Optional equipment including a cruise control system capable of slowing the car automatically if another vehicle merges into its path, aid safety. However, with other Jaguar models only scoring average results in the Auto Express Driver Power Survey, it is likely that the XKR Convertible will do the same. 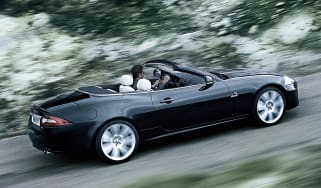