XKR-S supercoupé takes the big cat into Aston Martin territory, and we put it through its paces 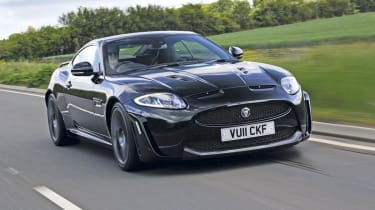 Jaguar has produced a coupé with the pace of an Aston V12 Vantage and the agility of a hot hatch, while retaining the luxurious refinement of the standard XKR. It’s an incredible achievement. It could be more hardcore, but by adding a dose more driver appeal to the XKR package, the firm has created its best performance model for years. It’s not cheap, but few rivals at this price can touch it.

Two hundred miles per hour. They might not openly admit it, but talk to the men behind the new Jaguar XKR-S, and if the  most powerful big cat since  the XJ220 wasn’t electronically limited to 186mph, it would  be knocking on the door of  that magic speed barrier. And having driven it, we can reveal it wouldn’t need much road to do so.
[[{"type":"media","view_mode":"content_narrow","fid":"69329","attributes":{"alt":"","class":"media-image"}}]]
The XKR-S is billed as the  fastest, most driver-focused Jaguar ever made (excluding  the XJ220), so it has some responsibility resting on its shoulders. Can it do almost  everything a Ferrari 599 GTB  can do, but for over £100,000 less? Or is it simply a faster  version of the XKR? Auto Express took a test drive to find out.

The Coventry firm showed there was even more potential  in the supercharged XKR when  it produced the limited-edition XKR-75 last year – but this car turns things up a notch. Every XKR-S appears ready for a  punch-up, and our metallic  black example looked about  as menacing as Jaguars get.
Tweaks to the exterior  start with a fresh nose, which incorporates twin air scoops above the grille, plus a deeper spoiler. Wider wheelarches, extended side sills, a carbon  fibre rear wing and quad exhausts poking out of a new diffuser give the XKR-S incredible aggression.
Adding to this are LED daytime  running lights, new tail-lamps, a host of R-S badges and 20-inch Vulcan alloys. All this isn’t simply to turn heads on the high street, though; the spoilers and skirts help reduce lift by 26 per cent.
That’s important when you consider the mighty 5.0-litre supercharged V8. A standard  XKR boasts 503bhp, the limited-edition XKR-75 had 523bhp, but this version gets 542bhp thanks to improved fuelling, a revised ECU and a new exhaust system.
On paper, it means 0-60mph  in 4.2 seconds (four-tenths faster than a standard XKR), 0-100mph in 8.7 seconds and a top speed of 186mph. That’s enough to  out-accelerate a £109,995 Maserati GranTurismo MC Stradale, a £135,760 Bentley Continental GT and a £179,022 Aston Martin DBS. And it’s nearly enough punch to knock out even more expensive supercars from Ferrari and Lamborghini.
What’s it like on the road? Slide into the luxurious sports seats – which feature neat embossed R-S badges in the  integrated headrests and extra side bolsters – and you’ll be met by a classy cabin that’s subtle  yet beautifully made. Thumb the starter button, and the V8 roars into life, but as you pull away  it settles to a hush and the  six-speed automatic gearbox shuffles the ratios smoothly.
Even though the suspension has been lowered by 10mm, and the springs are stiffer all-round, the ride barely feels any firmer than the standard XKR’s. Indeed, with refined motorway manners, the XKR-S is still every inch a grand tourer. Floor the throttle, though, and all hell breaks loose. With 680Nm of torque, the big V8 throws the 1,753kg coupé at the horizon, and as the rev counter sweeps past 4,000rpm, the soundtrack has a harder edge than any XKR before it. You can hear some supercharger whine, but it’s drowned out by a race track-style V8 roar, accompanied by some wonderful pops and bangs when you lift off.
Slick changes from the six-speed box ensure the XKR-S just piles on speed. Third and fourth gears prove the real party trick ratios, boasting such flexibility and seemingly endless, Airbus A380-style acceleration.
But the newcomer isn’t only rapid in a straight line. “This is a car that will transport you to the Nürburgring and then complete  a sub-eight-minute lap,” said the man who’s done just that, chief chassis engineer Mike Cross.
Changes to the suspension include new aluminium steering knuckles to increase precision, revised rear geometry and an updated Active Differential and Adaptive Damping system.
The result is increased steering urgency, sensational damping at high speeds and brilliant body control. The chassis balance is beautiful and adjustable – with so much power, it’s easy to arouse the traction control, but set the XKR-S to Track mode and you can slide the rear within a reasonable safety net. It’s hilariously good fun, and full of character.
The car doesn’t feel quite as keyed into a bend as a Porsche 911 GT3, but few rivals are as fast and capable. A Mercedes SL63 AMG, for example, just isn’t as involving. And there’s always the knowledge that if it was let fully off the leash, the XKR-S would be a proper 200mph car.
Share this on TwitterShare this on FacebookEmail