Four years after the launch of the softer, rounder, quieter, latest generation Cherokee, Jeep is giving the capable but compromised 4x4 a much needed mid-life facelift. 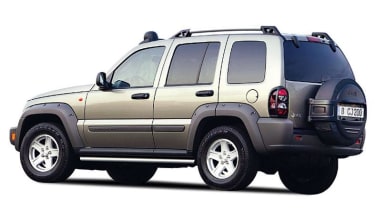 This Jeep can't come a day too soon and will go some way to restoring the legendary Cherokee name. Apart from niggly ergo-nomic problems and conservative design, there are no fundamental flaws, whether driving on or, in particular, off-road. But only when the designers are given a free hand will this car become as great as it was during the Nineties.

Four years after the launch of the softer, rounder, quieter, latest generation Cherokee, Jeep is giving the capable but compromised 4x4 a much needed mid-life facelift.

But the true extent of the changes is revealed when the company's official blurb refers merely to a "restyled" range with a "fresh" exterior and an "enhanced" interior. Buyers will need to look hard to spot the restyling, the freshness and the enhancements.

There is, however, a welcome new version called the Cherokee Renegade which goes some way towards matching the rugged, iconic appearance of boxy Jeeps of old. In fitting a slightly flatter bonnet, the company has gone to considerable trouble and expense - but it hasn't gone far enough.

The standard Cherokee will continue to look much like its familiar, tame self. Jeep designers have played around with new painted or chrome grilles plus wheels, bumpers, foglamps, roof rails and body mouldings. But they could and should have done more.

Inside, the seats are supposed to be bigger, but don't feel that way. Dials have sensibly reverted back to having white letters on black backgrounds, but still the interior looks and feels like it was designed for trips to Waitrose rather than the wastelands of Zambia.

The layout of some switchgear has been revised, but not always for the better. The switch to lock or unlock the doors, for example, is now where you'd expect to find the electric window button - and is frustrating to use.

Under the bonnet, the arrival of a new 163bhp, 2.8-litre CRD diesel eng-ine is the most significant development. As with the 2.4-litre petrol unit, it's mated to a new standard six-speed manual box. With its benefits in fuel economy, the oil-burner is the one to go for. For similar reasons, the long-established, but improved 3.7-litre V6 powerplant with four-speed auto box is to be avoided. It's smaller, almost as thirsty and doesn't sound as good as the ancient, but still appealing, 4.0-litre petrol unit of the outgoing model.

The frustrating point about 2001-2004 Cherokees and their tweaked replacements due in the first quarter of 2005 is that they're good, but not nearly as good as DaimlerChrysler could make them. Designers employed in Detroit and LA by the Jeep arm of the DC empire can produce truly great-looking models, as they have proven with their world-beating concepts. It's a mystery why they weren't allowed to make the Cherokee stand out more. The car would benefit from returning to its classic American roots, rather than continuing to look like a lesser Japanese or South Korean off-roader.

However, the restyled Cherokee is one of the most capable 4x4s for the money. Few buyers will ever realise just how tough the vehicle is on the worst terrain - it's truly world class.

On the road, the Cherokee does everything it can be reasonably expected to do. But from the moment you climb aboard and drive off, there's something missing - excitement. In this car, you have to go off-road for that.