Terrific off-road, especially in Trailhawk spec, but the Compass loses ground to rivals on tarmac 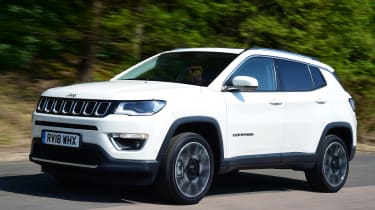 On the road, the Jeep Compass is not quite as planted as the best crossover rivals, but feels competent enough. There’s too much body roll if you attempt to take corners with gusto, and the chassis begins to feel unsettled at higher speeds that cars like the SEAT Ateca take in their stride.

The steering is decently weighted and the ride composed – at least on smooth tarmac – but the overall experience is less fun than the best rivals. That disappointment was exacerbated in the top 2.0-litre diesel model that we’ve tried by a noisy engine and a slow-to-respond nine-speed auto gearbox.

Off road, the Trailhawk version with its extra low range gear ratios, should make mincemeat of pretty much any of its more road-focused rivals.

There are two petrol options in the Compass, starting with the 138bhp 1.4 MultiAir unit. It makes 230Nm of torque, and helps the Compass do 0-62mph in 9.8 seconds. If you want a punchier petrol model, there’s a 168bhp version of the same engine with 250Nm, but that only comes with four-wheel drive and the nine-speed auto box. The 0-62mph dash takes 9.8 seconds and top speed is 126mph. 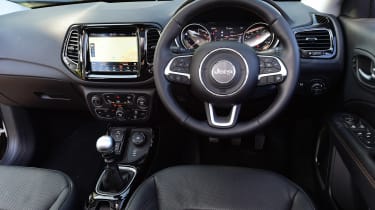 The punchiest diesel is the 168bhp 2.0 MultiJet II, and like the top-spec petrol it comes with 4WD and the nine-speed auto. It will do 0-62mph in 10.1 seconds. All the diesel models have the same top speed of 122mph.