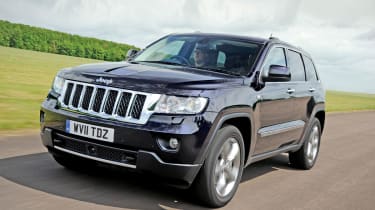 The new Grand Cherokee is a huge improvement over its predecessor. The 3.0-litre diesel engine delivers decent performance and economy, the car is comfortable and capable on tarmac and only a Land Rover can rival its off-road ability. Despite its below-par cabin quality and refinement, the Jeep is an attractive cut-price alternative to mainstream competitors.

Legendary American brand Jeep turns 70 this year. To celebrate, the company has overhauled its line-up, and leading the charge is the all-new Grand Cherokee.

Designed to go head-to-head with European heavyweights such as the Land Rover Discovery and Volkswagen Touareg, the range-topping four-wheel-drive model promises to be the most desirable and upmarket Jeep yet.

In the UK, buyers will be offered only one engine option: the new 3.0-litre V6 CRDi diesel developed by parent company Fiat. This produces 237bhp and puts out an impressively low 218g/km of CO2. The car also shares its underpinnings with the forthcoming Mercedes M-Class.

Externally, there’s no mistaking the newcomer for anything other than a Jeep. At the front is the brand’s classic chrome grille, while the flanks sport trademark squared-off wheelarches. The cabin is attractively styled and logically laid out, while our range-topping Overland featured leather trim and lots of real wood. However, the majority of the materials aren’t up to the standard buyers demand in this sector. The shiny plastics look a little cheap compared to European rivals, and the switchgear doesn’t operate with the same crisp precision. Still, standard kit is generous, with sat-nav, a reversing camera and a 30GB music hard drive.

There’s a decent amount of space, too. Occupants in the rear get plenty of head and legroom, while the electrically powered tailgate lifts to reveal a decent 782-litre luggage bay.

On the move, the Cherokee represents a huge step forward over its predecessor. The V6 oil-burner sounds a little gruff when extended, but it serves up strong acceleration. And while the five-speed auto box is slow to react, it does deliver smooth shifts.

In corners, the steering is accurate and there’s decent grip, although the front end can wash wide in tighter corners. Select the Sport setting, and the standard air-suspension is automatically lowered by 15mm, while throttle response is sharpened. In Comfort mode, the Jeep provides a compliant ride, with only big bumps and potholes upsetting its composure. And while it’s not quite as refined as rivals, it’s still a relaxing long-distance companion. Only when you head off the beaten track does the Grand Cherokee come into its own, though.

Adding to its appeal is a competitive price tag. A top-spec Overland model costs £43,995; you’ll pay £7,500 more for a Touareg with the same amount of kit.

Even in entry-level £36,795 Limited guise, the Jeep comes better equipped than the most expensive version of the big VW.