It’s official! Kia is not only the world’s fastest-growing motor manufacturer, it’s on track to prove itself the planet’s most improved car firm, too 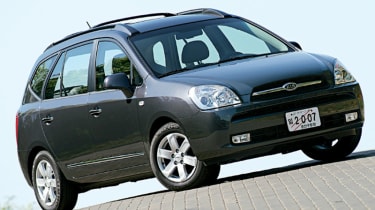 While it’s not for eager drivers, the new Carens shows how seriously Kia is taking its success. The model looks and feels as good as most of its European and Japanese rivals, too. If prices are pitched towards the budget end of the scale, the Carens will be more than £7,000 cheaper thana Toyota Verso, yet with comparable versatility. And the Kia is the more powerful contender.

It’s official! Kia is not only the world’s fastest-growing motor manufacturer, it’s on track to prove itself the planet’s most improved car firm, too.

By building a colossal new European factory, recruiting the man who designed the Audi TT and producing a rival to the Ford Focus, the Korean organisation hopes to prove it’s a global force to be reckoned with.

But although its impressive-looking family hatchback – named ED – is its most eagerly awaited showroom pro-duct, it’s not the only car in Kia’s line-up that’s aiming to tempt families away from more established brands. And the first to arrive is the new seven-seat Carens, which goes on sale in the UK in October.

The new compact MPV is such a huge improvement over the frumpy five-seater it replaces that it’s difficult to believe the two models actually come from the same manufacturer. Kia hasn’t merely taken a step forward with its next-generation Carens – it has made a giant leap by designing and building a vehicle that can truly be judged world-class.

And while it is not as desirable or of the same exceptional quality as more expensive rivals such as Toyota’s Corolla-based Verso or the Mazda 5, it does show the gap between the Japanese and the chasing Koreans has never been smaller.

Looking as fresh as any other car in the compact MPV sector, the front-wheel-drive machine has a comparatively small engine range, comprising a 2.0-litre petrol unit producing 143bhp, or a 138bhp 2.0 diesel. The performance of these models is virtually identical, with both variants sprinting from 0-60mph in 10.6 seconds.

We drove the oil-burner and were impressed by the wider track, longer wheelbase and stiffened suspension. There are improvements in just about every other department, as well, from six-speed transmissions to big weight savings. These provide further evidence that the incoming car is in a different league from the outgoing version.

However, there’s still some room for improvement. That’s because the latest Carens is based on the platform for the brand’s humble and unremarkable Magentis saloon, which also comes with the tried-and-tested 2.0 petrol and diesel powerplants.

If you drive with enthusiasm and are more interested in raw power and dynamics than anything else, then this compact MPV isn’t for you.

It’s aimed squarely at the bargain-seeking mums and dads who are more concerned with carrying the children and all their kit than pulling away sharply from the traffic lights or im-pressing the neighbours.

Having said all that, however, the 47mpg fuel returns we achieved while at the wheel of the diesel Carens are hard to ignore. Surely this model could be a wise investment for the British family on the move, already facing traffic-choked roads on a daily basis and paying £1 a litre for fuel at the pumps? Overall, the new Carens is massively better than the model it replaces, even if it’s not the best car in its class. Prices have yet to be announced, but if Kia can bring in an entry version for less than £11,000, it could be the best compact MPV for the money.