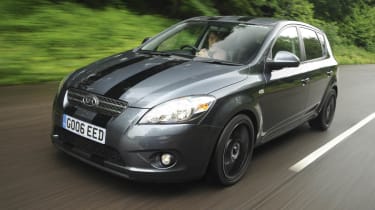 This one-off Cee’d is as close as buyers will get to a Kia hot hatch for now, but the results are impressive. The more powerful engine is appealing, and while the ride comfort could be improved, the handling is agile, grippy and fun. Kia estimates the upgrades add £1,500-£2,000 to the price, which represents pretty good value, too.

The image of Kia is most definitely on the up, but bosses still don’t think the world is quite ready for a hot hatch.

However, that hasn’t stopped them having a hand in this Cee’d, which points the way to a sportier edition of the family car. Developed by the Southampton-based Hendy Group – a dealer franchise which has plenty of motorsport experience – with input from Kia’s European research centre, it’s based on a 113bhp 1.6-litre diesel Cee’d GS.

To give performance a boost, the engine gets a reprogrammed ECU, taking power to 142bhp and torque from 255Nm to a hefty 305Nm. The suspension is overhauled, too, with Eibach springs, stiffer dampers and a rear anti-roll bar from the three-door Pro_cee’d.

Adding visual aggression are black alloys with wider, low-profile rubber, the front bumper and headlights from a Pro_cee’d and some questionable black stripes and tinted windows.

On the move, there’s no doubting the extra power – this Cee’d is extremely rapid. It surges forward under full throttle, so much so that you have to be quick with the gearbox to keep up. Despite the upgrades, the engine is still very smooth.

As for the handling, there’s little body roll and lots of grip, although the low ride height can cause problems over speed bumps and the stiff suspension is uncomfortable on bumpy surfaces. Still, it’s a lot of fun.

Kia says there are no plans to launch this Cee’d as a factory model, but it’s likely to be offered as a dealer special. All of the suspension parts are available through the network – only the engine upgrade isn’t at present. That’s a shame, as it’s the most likeable feature of the car.