With an all-new Picanto on the horizon time is running out for the existing car. However, it’s still perfect for buyers on a tight budget. 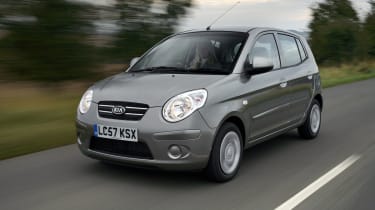 The Kia Picanto is getting on for seven years old now – and it’s starting to show its age. A facelift in 2007 added a softer nose and round headlamps, but the rest of the exterior could trace its roots back to 2004. Overall it lacks the cheeky appeal of European rivals, such as the Fiat Panda and Peugeot 107. On the plus side, a five-door layout promises decent versatility for a city car. Range-topping Graphite models get extra showroom appeal in the form of alloy wheels and a tailgate spoiler.

With an all-new Picanto on the horizon time is running out for the existing car. However, it’s still desirable city runaround for buyers on a tight budget. Generous equipment levels, and compact dimensions make it an impressive performer around town, but the ride is very firm, and the car is not as stylish as rivals like the Fiat 500.

You don’t expect scorching straightline pace with a city car, but the Kia is slower than most. Entry-level models get a 61bhp 1.0-litre petrol engine that takes a leisurely 16.4 seconds to sprint from 0 to 60mph – although it feels nippy around town. Pricier versions get the 64bhp 1.1-litre unit that boasts stronger mid-range torque. On the road the Picanto feels remarkably composed, thanks to its light controls, excellent visibility and decent grip. Only an uncomfortable low speed ride spoils the otherwise accomplished display.

Few cars are as cheap to buy and run as the Kia Picanto. Both engines will return nearly 60mpg, while CO2 emissions of 114g/km mean an annual tax disc will cost only £30. Residual values aren’t a match for the class leaders, but with such a low list price you won’t lose too much when it comes time to trade-in. As with other models in the Kia line-up, the Picanto benefits from the firm’s industry leading seven-year warranty.

While the Picanto’s exterior has remained largely unchanged since its debut, the cabin has benefited from a major overhaul. The dashboard and instruments take their cues from the firm’s C’eed family hatchback, meaning a grown-up look and feel. A comfortable driving position further boosts the Kia’s appeal. Entry-level models are a little spartan when it comes to kit, although electric windows are standard. It’s worth forking out extra for ‘2’ trim, because it adds must have items such as a rev-counter, air-con and iPod connection.

Given its dinky dimensions it’s no surprise to find the Picanto is short of outright space. Taller passengers will struggle for legroom in the rear, while the narrow stance mean the Kia is effectively a four-seater. On the plus side, the five-door layout means access to the cabin is straightforward. There’s also plenty of cubby space, with two large cupholders in the centre console and usefully shaped door bins. Lifting the tailgate reveals a cramped 157-litre load bay – folding the rear bench flat liberates a more useful 882-litres.

While the mechanically simple Picanto promises trouble free motoring, its safety record is a cause for concern. A three star EuroNCAP rating is poor even by tiny city car standards, while we’d like to see more than two airbags fitted as standard. However, order a new Picanto today and you will benefit from standard ESP and Brake Assist – both of which should help avoid an accident in the first place.