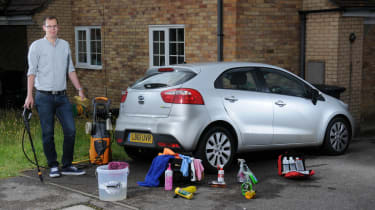 As products writer, I should have the cleanest car on the fleet, according to the rest of the office. It’s fair comment; my desk is littered with various formulas and spray bottles.

However, due to my testing schedule, only specific parts of the Rio have been cleaned. For instance, I’ve recently been comparing bug shifters and alloy wheel cleaners – which means that only the bonnet and one alloy are shiny. The rest of the car was covered in filth, which was giving LB61 UVR a bit of a patchwork paint finish. As a result, I decided to give it a summer spruce-up.

First up was the bodywork – specifically the tailgate. The angular lines look great, but they’re prone to picking up dirt. However, it’s a shame the silver metallic paint – which is a £425 optional extra – isn’t the most eye-catching colour, even when it’s clean.

One of my neighbours has an electric blue Rio fitted with gorgeous five-spoke 17-inch alloys, which looks absolutely great. And those wheels would be far easier to clean than the 10-spoke 16-inch ones fitted to our Kia.

Not only are they tricky to keep pristine, they do nothing for the ride comfort. In combination with a firm suspension set-up, they cause the car to crash uncomfortably over bumps and potholes. Still, I have tried to protect the wheels from kerbing – by fitting Alloygators – and I may attempt to improve the ride comfort by experimenting with a new set of tyres.

If only there was some way to make the interior stand out. Everything is practical and functional, but, I’m finding the monochrome colour scheme a little oppressive. The radio is surrounded by grey, and the only flash of colour comes from the backlit red text on the stereo and the flashes of silver trim around the air-con controls.

However, I can’t fault the amount of standard kit. In mid-range 2 trim, it includes six airbags, Bluetooth, air-con, a USB input, a multifunction leather-rimmed steering wheel and – crucially – a pair of 12-volt sockets so I can charge up all the in-car gadgets I test.

On the road, though, the Kia feels slow and underpowered, even with more than 7,000 miles on the clock. I’ve found myself holding gears for longer than I’d have liked just to get up to speed on the motorway. This could explain my poor fuel economy – while it’s up by 0.6mpg since my last report, 43.7mpg isn’t great, especially when you consider that Kia claims this car can return 74.3mpg.

Still, that’s far better than many superminis on the market, and it’s not bad for a car which is often fully loaded. It has carried products to photoshoots, taken friends to Formula One racing and frequently transported four adults and a dog on various cross-country trips.

It’s also worth remembering that this is an eco-focused supermini. Apart from its stop- start system and gearshift indicator, from the driver’s seat it’s hard to tell it’s a road tax-exempt, eco special. The low running costs and decent practicality certainly make it a hassle-free ownership prospect. If only it was as easy to keep clean as it is to run.

“I agree with Jamie that the Rio’s ride is far too firm. Rivals like the Ford Fiesta prove that small cars can be comfortable as well as fun to drive.”Dean Gibson, Production editor

“The Rio with a 1.4 CRDi engine will use less fuel than the 1.1 eco special because of its additional torque – you won’t have to work it so hard.”Nickbsmooth, via www.autoexpress.co.uk