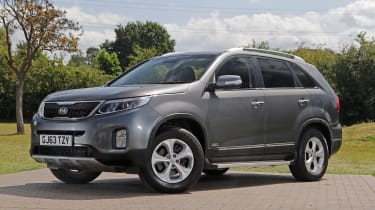 The Sorento isn’t the most sophisticated car around, but there’s still plenty to like about it. Although the model range isn’t wide, the 2.2-litre diesel fitted to virtually all second-generation Sorentos is strong and frugal; it’s just beaten on refinement by many rivals, especially those with a V6 engine. Buy one of the last Mk2s made and it’ll come with five years’ warranty still to run – which is two years more than most new cars offer. Some rivals are more accomplished, but you’ll pay thousands more for those. Kia competes where it matters: providing tough, reliable, practical and affordable transport.

When the original Kia Sorento was launched in 2003, it was ideal for anybody wanting a reliable SUV who put value and reliability ahead of hi-tech kit and a posh badge. It was a bit rough around the edges, and slightly awkwardly styled, but this off-roader attracted an enthusiastic following.

By the time the second-generation Sorento arrived in 2010, Kia’s stature had grown markedly; it still wasn’t on par with Volkswagen or Land Rover, but the brand had proven it could build desirable cars.

Designed more for road use, the Mk2 Sorento was a smart buy, especially for those keen to tow. Now that the SUV has been superseded, nothing has changed. 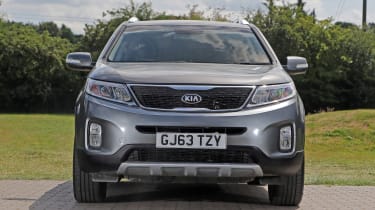 The second-generation Sorento arrived at the start of 2010. Buyers could choose between 2.4-litre petrol and 194bhp 2.2-litre diesel engines, the latter coming with either a manual or auto gearbox and front or four-wheel drive. Trim choices comprised 1, KX-1, KX-2 and KX-3, with the KX prefix denoting the fitment of four-wheel drive.

Kia has a tendency to keep things simple with its model ranges, and slow sales for the cheaper variants meant the line-up was quickly simplified even further. 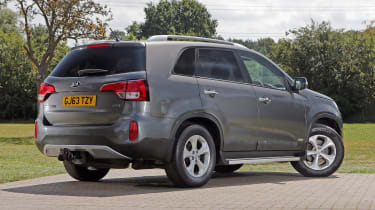 By the time the Sorento was facelifted in autumn 2012, the 2.0 CRDi and 2.4 petrol engines and 1 trim level had gone, so you’re likely to be buying a 2.2 CRDi with four-wheel drive and a manual or auto gearbox.

Alternatives to the Kia Sorento Mk2

Budget seven-seater road-biased SUVs aren’t all that common. If seven seats are key, you can consider the more agricultural Mitsubishi Shogun or Toyota Land Cruiser, while the pricier Land Rover Discovery is the most accomplished all-rounder, but doesn’t have the reliability of the Kia.

The VW Touareg is excellent with its six-cylinder diesel engine, especially if you’re towing, but can be costly to buy and run. 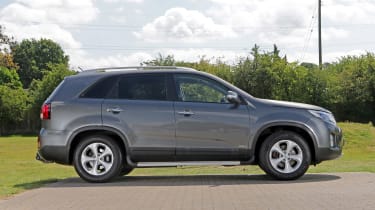 You could also consider the Hyundai Santa Fe, which is related to the Kia and shares many of its attributes, including a very good reliability record, affordable purchase prices and relatively low running costs thanks to its sheer dependability.

The spare wheel sits underneath the car, but it’s easily stolen, so ensure it’s there before buying. Anti-theft devices are available.

Check the leading edge of the roof, which can suffer from corrosion – especially if a replacement windscreen has been fitted.

Uneven tyre wear isn’t unusual with the Sorento, although many owners still find they can get around 30,000 miles from the original set of rubber.

The third row of seats is fine for children and small adults, but it’s not much use for six-footers on long journeys. 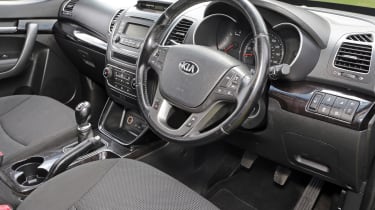 Fit and finish is good, but this Kia doesn’t have a premium feel. While it’s roomy, the car is best viewed as a 5+2-seater, with the third row for children. You get a 60:40-split rear seat and adjustable height driver’s seat. Boot space stands at just 111 litres with all the seats in place, or 1,546 litres with row three folded.

Checks alternate between minor and major, which are generally priced at around £259 and £319 respectively, but sometimes the bill will be higher if there’s something extra to replace. For example, the coolant needs to be renewed every five years or 62,500 miles and the brake fluid has to be replaced every other year, but the cost of doing this is built into the price of the service.

All Sorento engines are chain-driven, so you don’t need to worry about replacing any cambelts.

Kia doesn’t tend to issue many recalls, and the Sorento has been called back just twice in its seven years on sale. 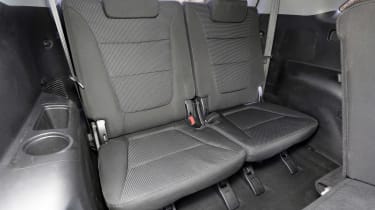 The first time was in June 2013, relating to cars built up to the end of April 2011. This concerned a brake light switch fault, potentially leading to ESP, cruise control and gear selection issues on autos. It also affected the Soul, Sportage, Optima, Carens and Sedona; over 40,000 cars were recalled.

Then, last month, Kia called back 24 Sorento 2.0 and 2.2-litre diesels built from 1 September to 31 October 2011 because of the risk of the fuel feed hose deteriorating.

The Mk2 Sorento has never appeared in our Driver Power satisfaction survey, but the Mk3 ranked in a very respectable 32nd place in last year’s poll. Across all three generations, Sorento owners score their cars an average of 4.2 out of five (84 per cent) on our sister site, Carbuyer; most Mk2 drivers rate theirs between four and five stars.