The Kia Soul is popular in the US, and the new model feels like it’s been tailored for that market.

It's a surprise that the new Kia Soul has poorer emissions and economy figures than its predecessor. Some of that is due to its increase in size, but the lack of stop-start also puts the 1.6 diesel on the back foot - on test, a return of 40.8mpg was 8.1mpg worse than the similar Peugeot 2008 which comes with stop-start technology.

Unlike some other Kia models, there's no super-efficient EcoDynamics version of the Soul, so those looking for ultra-low running costs will be disappointed. 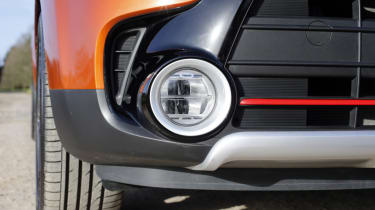 If you really want to reduce your day-to-day running costs though, and don't need to cover big mileages very often, then the Soul EV is the one to go for. A full charge from a household socket will take between 10 to 12 hours, although fast chargers can top it up in around half an hour, but either way the electricity required costs a fraction of the price for a tank of fuel.

Insurance groups for the Kia Soul are pretty low, ranging from groups 9 and 10 for petrol models to groups 10 and 11 for diesels. The EV version is the most expensive to insure at group 18.

Depreciation is not over-kind to Kia models as a rule, but the Soul doesn’t suffer as much as some. Petrol models in cheaper trim levels will keep the largest percentage of their purchase price according to experts at CAP.

The manual petrol model is likely to do best, with a 46 per cent residual value over three-years/36,000 miles. That drops to 38 per cent for the range-topping Soul Sport, which is still some way better than the 32 percent residual value the electric version is predicted to achieve.

However with the Plug-in Grant, the electric vehicle’s depreciation is mitigated to the extent that total cost of ownership should ultimately be similar to the most expensive diesel.