The Soul’s engines feel a bit old-school, as the petrol is thirsty and the diesel clatters 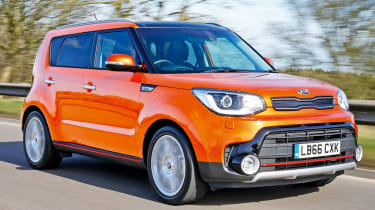 Climb into the Kia Soul’s driving seat and a large windscreen, smaller A-Pillars and raised ride height give an excellent view out the front, and the wheel adjusts for reach and height – which gets things off to a good start.

Kia’s Flex Steer system gives you a button on the wheel to switch between Sport, Normal and Sport steering modes, but while weighting increases a bit, there’s little real difference in feedback or feel. However, the increased proportions of the latest model mean it feels more planted than earlier versions, while the more rigid body helps reduce body roll.

The six-speed manual gearbox is easy to use and there’s the option of a 7-speed automated dual clutch transmission from 2 trim onwards with the diesel engine, while the 201bhp Soul Sport is auto-only.

The Soul's ride, although not brilliant, is much improved over the outgoing model thanks to changes in the suspension setup. It’s comfortable on the motorway but it still fidgets about over sudden changes in the road surface. 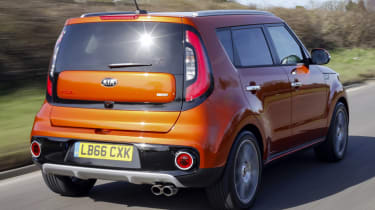 While the limited range will put some customers off the EV version of the Soul, there's nothing wrong with the way it drives. Acceleration is brisk off the line and the lack of engine noise makes it smooth and relaxing to drive. It's heavier than the standard car, but the low centre of gravity means it feels secure and darts around corners nicely.

The relatively expensive Soul Sport  remains something of a niche choice, given the car's focus on practicality. It's quick enough, but its large 18-inch alloy wheels exaggerate deficiencies in the standard car's ride.

You have a choice of a 1.6-litre petrol or 1.6-litre diesel engine with the Kia Soul. The standard petrol motor isn’t turbocharged, and while it's relatively cheap to buy, it's not particularly economical. The 1.6 diesel isn’t the most refined engine around and it fires up in the Soul with a clatter like the diesels of old and it never really smooths out on the move – although it settles down to a background hum at a cruise.

The petrol engine is marginally faster than the diesel in the official figures too, by two tenths of a second from zero to 60mph (10.6 seconds versus 10.8 seconds), and two mph flat out (115mph versus 112mph). The DCT/auto diesel has almost identical figures.

Performance from the turbocharged 201bhp Soul Sport is sprightly enough, with 0-62mph taking 7.5 seconds. Its numb steering doesn't engender much of a sense of fun though, while the dual-clutch gearbox is slow to shift when pressing on.