We try quirky new Kia Soul CRDi diesel, likely to be the top-selling version in the range 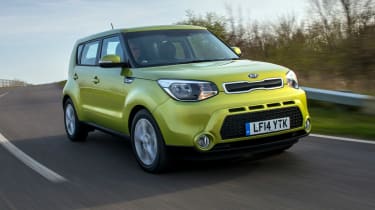 A more polished and appealing package than before, the new Kia Soul diesel ticks the boxes the previous car didn’t. The drawbacks mainly surround the engine, with its high emissions and rattle at idle, but it’s smooth on the move. At £17,500, the Soul doesn’t lose sight of Kia’s brilliant value ethos, and it makes a convincing alternative to the established crossover options.

We’ve driven the all-new second-generation Kia Soul before, but only with the 1.6-litre petrol engine. Kia admits that the diesel will be the big seller – and now we’ve had the chance to try it in the UK for the first time.

Fans of the original Soul’s styling will love the fact that the new car is bigger and bolder than ever. There’s a new platform, too, which boosts practicality. The Soul now rides on the larger Cee’d architecture, making it 20mm longer and 15mm wider, with a wheelbase stretched by 20mm.

While the 126bhp 1.6-litre turbodiesel is slightly down on power over the petrol car, the healthier torque output – 260Nm compared with the petrol’s 161Nm – makes this more accessible more of the time. Also, the diesel feels punchier than is suggested by the official 0-62mph time of 10.8 seconds (two-tenths behind the petrol).

On the move, the engine is a lot smoother and revs more freely than before. But at idle, vibrations from the diesel become intrusive. On the plus side, as the new Soul’s grown in size and is now 28 per cent stiffer than the outgoing car, it’s more surefooted on the road. 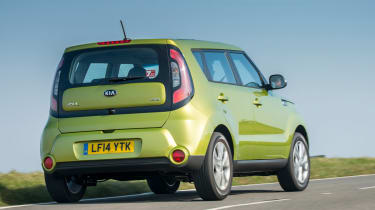 Kia’s also tweaked the steering and suspension to help boost the driving experience, with the cushioned ride a big improvement over that of the previous model. Better still, claimed economy of 56.5mpg beats the Skoda Yeti’s, but emissions of 132g/km are considerably higher than some rivals’ – including the Peugeot 2008, which sneaks under 100g/km.

The original Soul was never short on cabin space, but the boosted proportions mean the second-generation model now offers even more. The larger platform on which the second-generation Soul rides increases the already spacious cabin. The bigger 354-litre boot and wider tailgate opening also boost its practical credentials.

The interior has a far more upmarket feel, and uses more premium materials. Later in the year, new range-topping Mixx and Maxx trims will arrive, promising extra kit and even more dramatic styling.

A bright, eight-inch touchscreen is standard on our mid-spec Connect Plus model. The screen also relays images from reversing camera, while 17-inch alloys feature as well.