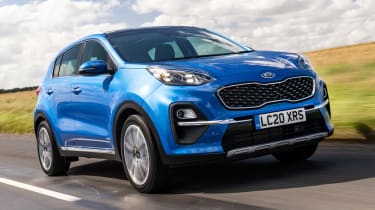 Mild-hybrid tech doesn’t transform the Sportage into a class-leader; it’s much the same as before, and the 48-volt system doesn’t bring any night-and-day improvements to running costs. It’s still pleasant enough to drive, if not a match for the Ford Kuga, but generous kit levels and Kia’s brilliant warranty – backed up by excellent Driver Power scores – will make it stress-free to live with.

The Kia Sportage has been given the mild-hybrid treatment for 2020. It’s part of a wider electrification strategy for the Korean brand, which involves launching seven new dedicated full EVs by 2027, a hydrogen fuel cell car by 2025 and a host of plug-in hybrids in the meantime.

So this Sportage is at the conservative end of the emissions-busting masterplan, then. It starts with the 1.6 CRDi diesel, which loses an alternator and gains a belt-driven starter/generator unit. This harvests energy from the engine when coasting and charges a 0.44kWh 48-volt battery. This lets the engine switch off more readily and start up instantly when power is needed, and can even deploy a little torque boost under acceleration to reduce load on the engine itself.

All of this helps to save fuel. In official tests, the Sportage 48V manages between 47.9mpg and 52.3mpg depending on trim, and CO2 emissions of between 141g/km and 155g/km – an improvement over the Sportage’s old 1.7-litre unit, but similar to the non-hybrid Peugeot 3008 diesel.

The engine is a little more gruff than some rivals’, but it settles down at a cruise. Its performance is fine for the class, too. 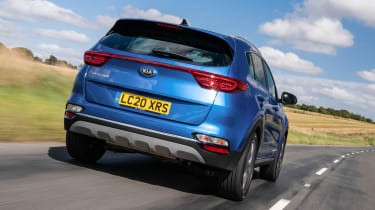 What this powertrain does lack is Kia’s latest iMT transmission. We recently tried this new clutch-by-wire system in the Ceed, and it only highlighted how much the Sportage needs the tech. Here, the regular clutch engages sharply, and when combined with an inconsistent throttle response makes it frustratingly tricky to control at parking speeds.

We were hoping for slightly better fuel returns, too. The stop-start system that’s supposed to give more engine ‘off time’ didn’t engage very often.

The new system adds little weight to the package, so this model drives much like the rest of the Sportage range: a little firmer than the class average, but with safe handling and precise, well weighted steering.

The 48-volt battery sits under the boot, robbing underfloor storage and cutting overall load volume by 52 litres to 439 litres. Passenger space is unaffected in a cabin that’s just starting to feel its age; the design lacks the sense of occasion of a 3008, and some plastics feel a little cheap. Still, the seats are comfortable and the infotainment is among the class best.

As well as adding mild-hybrid tech, Kia has also simplified the Sportage line-up. Buyers can choose the 48-volt diesel with front- or four-wheel drive, and petrol buyers have a choice of a 1.6-litre petrol – either turbocharged (174bhp) or not (130bhp). 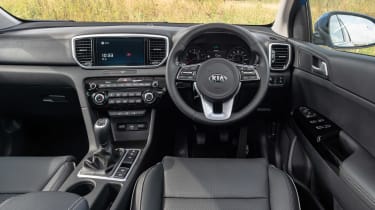 The engines are split across four trim levels. The most basic 2 trim is now so well equipped that there’s little point in spending more on a higher specification; 17-inch alloy wheels, privacy glass, rear parking sensors and a reversing camera, heated seats front and rear, and an eight-inch touchscreen system with sat-nav and smartphone connectivity are standard.

At first glance, the Sportage looks cheap, too. The mild-hybrid diesel model starts from £25,150 and the range as a whole kicks off at £23,445 for the basic petrol.

Kia currently offers a £2,500 discount to buyers choosing to finance a Sportage on a PCP contract, which means that this 3 mild-hybrid diesel costs £368 per month over a three-year deal and with a 10 per cent deposit. However, Ford currently offers zero-per cent finance on its Kuga, so a 148bhp mild-hybrid diesel Titanium only costs £6 per month more.