The new look of the Sportage might divide opinion but look a little deeper and you’ll quickly discover that it’s better made, roomier and noticeably more fun to drive than before. The cost of this is reflected in the small price hike but you can be sure that the Sportage is a better all-rounder than it has ever been. However, if it were our money we’d probably stay clear of this turbo petrol engine and opt for one of the diesels instead.

It’s hard to think of a car that has changed a manufacturer’s image quite like the Kia Sportage. The third generation car – which is now bowing out after six years on sale – transformed Kia from a maker of cheap and cheerful cars to one that builds stylish and fashionable ones. So it’s fair to say the stakes are pretty high for the new, fourth-generation car; this is our first drive of a UK-spec Sportage.

The newcomer isn’t a gargantuan step on from the old car like previous generations have been; the shape is evolutionary and it’s grown a little in size. The proportions are largely the same with the distinctive sloping roofline, racy-looking narrow side windows and bugling wheel arches also carried over from the outgoing model. But the rear tailgate has been tidied up with simpler lines and sleeker tail-lights. 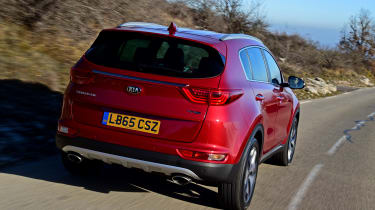 The big change is at the front, though, as the Sportage gets a unique ‘Tiger Nose’ grille but we think the Sportage’s new front end looks a little busy – something which is emphasized on our GT Line test car with its four cube-shaped fog lamps.

The growth in size is negligible on paper. The width and height are the same as the outgoing car but there is a jump of 40mm in length and 30mm in the wheelbase. The increases really make themselves felt in the rear, there is a little more kneeroom and the floor is also 40mm lower meaning getting in and out is easier, too.

Staying inside and the 60/40 split rear seats fold almost completely flat and boot capacity is a decent 491 litres - 26 litres more than - and 1,480 litres with all the seats folded. However, while the Sportage has more room than a Ford Kuga and a Nissan Qashqai with the seats folded, a Mazda CX-5 has the Korean SUV trumped on both fronts with a 503/1,620-litre boot. 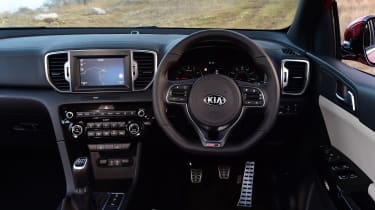 It may not measure up to the best in the class for space but the Sportage is a big improvement on the old model for interior comfort. The dashboard design is far more mature and elegant and quality has improved noticeably – the upper part of the dash is covered in soft-touch plastics and the knobs and switches all feel sturdy. All but the entry-level car gets a seven- or eight-inch touchscreen, too.

Speaking of equipment the range remains simple. All Sportages comes in a set of regular trim levels, 1, 2, 3 and 4. All feature standard kit including 16-inch alloys, air con, Bluetooth with music streaming and a healthy haul of safety kit such as Trailer Assist and Downhill Brake Control. KX versions have four-wheel drive, while the GT-Line model tested here adds sportier styling, black and grey leather seats, a TFT display between the dials and heated front and rear seats. 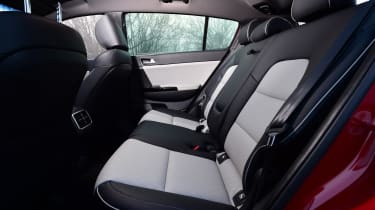 The GT-Line only comes in two engine choices – a 2.0-litre diesel and, tested here, a new 1.6-litre turbo petrol with four-wheel drive. On paper it sounds quite enticing with 174bhp and 265Nm of torque. When fitted with Kia’s seven-speed dual-clutch gearbox, it’s also the quickest Sportage and gets from 0-62mph in 8.8 seconds while returning 37.7mpg and emitting 175g/km of CO2. But despite these healthy power figures, the 1.6 turbo never really feels that quick, although it is pleasantly quiet and smooth on the move even when it’s being revved.

The rest of the engine range remains unchanged from the previous Sportage with company car drivers naturally swaying towards the 1.7-litre diesel (61.4mpg and 119g/km of CO2), but there’s also a naturally aspirated 130bhp 1.6 petrol in the range along with a 2.0-litre diesel with 134bhp or 182bhp. 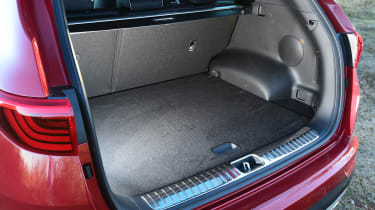 As for the four-wheel drive system, for the most part the Sportage runs in two-wheel drive and can send 40 per cent of its power to the rear wheels. There's also a lock mode to keep all four wheels turning if necessary.

While the engine doesn’t delight as much as it should, the Sportage is a lot more fun to drive than before and that’s thanks to a new steering system with a repositioned electric motor that gives far better response. On twisting roads, the Sportage showed it has surprisingly sharp steering and good levels of feedback. And while the Sportage has grown up in the refinement department – it’s considerably quieter and more comfortable than the previous model – the quick change in direction doesn’t result in excessive body roll. But the chassis doesn’t feel all that agile, meaning the Mazda CX-5 and the Ford Kuga are still more fun to drive.

However, the gains over the old Sportage do come at a cost. Prices kick off at £17,995 for the entry-level 1 and four-wheel drive KX1 – that’s a rise of £400. Other models have risen by £700 and £1,200 but the Sportage is a more accomplished all-rounder than it ever has been and easily rises towards the top of the class ticking nearly every single box.