We try out the new Kia XCeed pseudo-SUV with the brand's 1.4 T-GDi petrol engine to see if it's the pick of the range 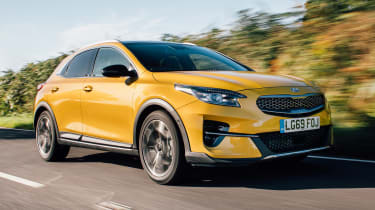 The market for family hatchbacks with SUV trappings is small compared with the more conventional, more expansive C-segment crossover class, but the new Kia XCeed is worth considering if you value a strong kit count, a well built cabin, and peace of mind in the form of a long warranty. Petrol buyers won’t find the 1.4-litre option wanting for performance, but the turbocharged 1.0-litre three-cylinder option will be much cheaper to run.

For a brand with such a large SUV line-up, Kia’s decision to introduce the new, jacked-up XCeed may seem confusing at first. It already sells an SUV in this segment in the form of the Niro – but Kia claims the XCeed goes after a different buyer.

First of all, at launch the line-up is combustion power only, compared to the electrified-only powertrain selection you’re presented with if you open a Niro brochure. But also, this is a car tasked with playing its part in a brand-building exercise.

The Ceed nameplate, despite its slight rejig in 2018, has become an important part of Kia’s story. Around since 2006, subsequent Ceed generations perfectly tell the story of the company’s move to the middle ground from more budget-oriented beginnings, and Kia wants to build a family of cars around the nametag. Hence why the XCeed lines up alongside the regular hatchback it is based on, the practical Ceed Sportswagon and the sporty Proceed shooting brake too. 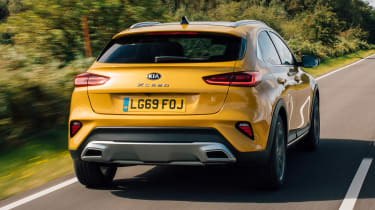 We’ve already tried it on home turf with diesel power, but two petrol options exist as well. A 1.0-litre turbocharged three-cylinder with 118bhp, and a four-cylinder option 1.4-litres in size and also turbocharged, driven here.

While the underpinnings are largely shared with the normal Ceed, sharing the same platform and the same 2,650mm wheelbase, the exterior design is far from simply being the hatchback with added off-road inspired rugged touches. The panelling is totally different, with only the front doors shared. There’s a clear family resemblence, but the nose and tail are quite different when placed side by side, with a sloping roofline and more pronounced rear end. Usual crossover inspired touches like protective wheel arch cladding and front and rear skid plates are present and correct, while the XCeed rides 42mm taller too.

It’s still far from being a car you could take off road - the fact a Sport driving mode is found on our range topping First Edition model rather than anything suggesting beaten track ability says a lot - but it suitably projects a tougher look, and the seating position feels just about taller than the regular Ceed. 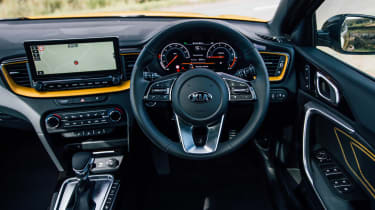 To drive it’s barely any different though, and that means its a car without flair from behind the wheel and it’s not one to trouble the fundamental qualities of the Focus, but it’s without any major drawbacks either.

The steering wheel is well sized and the driving position highly adjustable, and while the steering foregoes any feedback the rack speed is suitable and it feels accurate, and it’s easy to place the XCeed where you want it on the road.

With a bit of extra suspension travel it rides slightly better than the regular Ceed, though not without imperfection. The damping couldn’t quite disguise the small amount of rubber worn by the 18-inch wheels standard on our First Edition model, transmitting some minor thumps into the cabin where you otherwise would expect a ripple, and road noise could be quelled better, but it’s not uncomfortable.

The 1.4-litre turbocharged petrol option will be the most popular engine with private buyers, and by and large it’s a good fit for the XCeed. With 138bhp and 242Nm torque, 0-62mph is claimed in 9.2 seconds, so there’s more than enough performance to lean on and it rarely feels strained. It’s not particularly intrusive either, though claimed fuel economy of 40.4mpg should mean figures dipping into the high 30s are what most average drivers can expect. The seven-speed DCT transmission is a bit hesitant from the off, but it shifts smoothly on the move.

It’s more refined than the diesel, but a lot of private buyers will still find that the 1.0-litre three-cylinder option is suffice. Performance wise, it doesn’t lag far behind the 1.4-litre option, it will return over 40mpg with minimal effort, and it’s cheaper to buy. Many should explore it.

Inside, driver and passengers are presented with an interior lifted from the regular Ceed, save for some of the extra flair and contrast stitching featured on the First Edition model. It’s not the most exciting place in the world and on less lofty trim levels the difference in quality compared to the First Edition is immediately evident. But it feels well screwed together and is complemented nicely by a sharp 10.25-inch touchscreen infotainment unit with navigation and a bright 12.3-inch digital instrument panel. 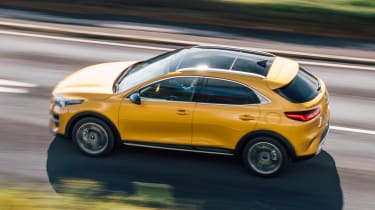 Room up front feels good, but the rear quarters aren’t the roomiest and the front seats extend almost to the floor, eating foot room. The boot opens wide enough with a slight lip to overcome, but at 426-litres it’s of a good size, and up on the regular hatchback due to the slight reprofiling of the rear end.

There’s more kit by default than in a Ford Focus Active X, but the Kia is a marginally more expensive car both on list price and on a monthly PCP deal. Still, Kia’s seven-year warranty could soften that for many.