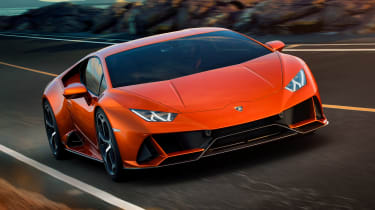 Following recent teaser images, Lamborghini has officially revealed the facelifted Lamborghini Huracan – featuring updates to its styling, chassis, engine and technology. First deliveries are expected in the spring, with prices expected to start at £165,256 (excluding tax).

The updated model, dubbed the Lamborghini Huracan Evo, will feature the same 5.2-litre naturally-aspirated V10 as the outgoing model, but with new Titanium intake valves and an uprated exhaust system. As a result, the Evo produces 630bhp and 600Nm of torque, which is 28bhp and 40Nm more than the previous Huracan.

Power is fed through a seven-speed gearbox and, thanks to its all-wheel drive system, the Huracan Evo has a claimed 0-62mph time of 2.9 seconds. Its top speed is in excess of 201mph, placing its performance on par with the current Huracan Performante. 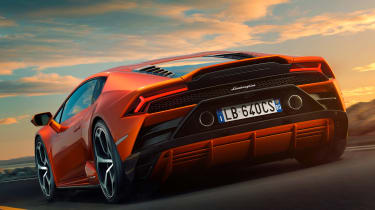 The new Huracan will retain its existing four-wheel-drive system, which is complemented by a host of chassis updates. Revisions include a new rear-wheel steering system and four-wheel torque vectoring, as well as Lamborghini’s new Dinamica Veicolo Integrata (LDVI) central processing unit, allowing the chassis to be tailored to the driver’s preferences.

•  Best supercars on the market

Accompanying the LDVI system is a revised version of Lamborghini’s Piattaforma Inerziale (LPI). This collection of accelerators and gyroscopes monitors the road conditions and adjusts the car’s traction control, torque-vectoring system and adaptive suspension accordingly.

Lamborghini’s returning ANIMA controller will also allow fine-tuning of the Huracan’s characteristics. It will provide a choice of three driving modes; STRADA, SPORT and CORSA, with the former being for everyday use, and the latter two for more spirited driving and track use.

Exterior revisions include unique 20-inch alloy wheels, new front and rear bumpers, fresh side skirts and new air intakes. The rear wing, front splitter and rear diffuser will also be updated, along with a high-mounted exhaust system exiting either side of the number plate. 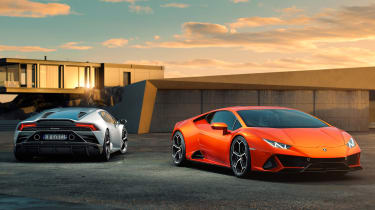 Inside, the new Huracan Evo will be trimmed in a blend of Alcantara and leather. It will also receive a new 8.4-inch infotainment system with Apple CarPlay, sat-nav and internet radio. Whether or not Android Auto will be supported is yet to be confirmed.

Lamborghini states that the Huracan will be available with a range of interior and exterior styling packages, allowing customers the broadest possible range of customisation options. Prices for these packages are yet to be announced, but we’ll update you with more information when it becomes available.

Now read our review of the Lamborghini Huracan Spyder. Let us know your thoughts in the comments section below…