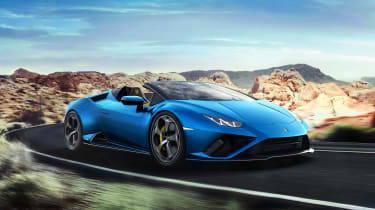 The Italian supercar maker says the Huracán RWD EVO Spyder features a range of chassis tweaks that focus on driver engagement rather than outright speed. It is powered by the same naturally aspirated 5.2-litre V10 engine as the standard car, however, due the lack of four-wheel-drive power has been reduced by 20bhp and torque by 40Nm – for respective figures of 610bhp and 560Nm.

Power is sent to the rear wheels via a seven-speed dual clutch gearbox which, along with the horsepower deficit, means the RWD Spyder is 0.6 seconds slower from 0–62mph than the standard Spyder, with a time of 3.5 seconds. However, due to the loss of a propshaft and front differential, the newcomer is around 40kg lighter than its four-wheel-drive sibling.

The rear-wheel-drive Huracán also does without the all-wheel drive model’s torque vectoring system, featuring instead a recalibrated version of Lamborghini’s P-TCS (Performance Traction Control System), which is designed to assist the driver when powering out of corners – even when drifting. The system is controlled by Lambo’s familiar Strada, Sport and Corsa chassis profiles, each of which offers a progressively more oversteer-friendly setup.

There’s a handful of cosmetic upgrades over the standard Huracán, too. Alongside the obvious missing roof, buyers get a tweaked front splitter, some new ducting, a new rear diffuser and a fresh set of 19-inch alloy wheels. The Huracán Spyder’s convertible top can also be stowed in just 17 seconds, at speeds of up to 31mph.

Inside, the rear-wheel-drive Huracán Spyder gets a pair of deep bucket seats, a sport steering wheel, aluminium pedals and an 8.4-inch touchscreen infotainment system, which offers support for Apple CarPlay and Amazon Alexa. Buyers also get the same retractable rear screen as the standard Huracán Spyder.

What do you think of the Lamborghini Huracan Spyder rear-wheel drive? Let us know below...