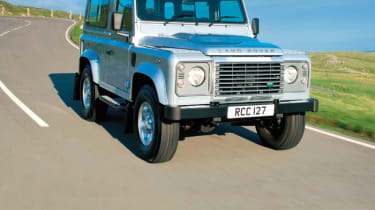 A fresh engine and significant cabin improvements represent the biggest changes to the legendary Land Rover since its ancient cart springs were ditched in 1984. The Defender's robust powerplant is shared with the Ford Transit, and adds a new dimension to the tried and tested formula, with more torque and less noise. Interior refinements are long overdue but welcome all the same. While it still won't scare the latest generation of SUVs when it comes to comfort, the changes have provided the Defender with a new lease of life.

It's the car that started it all for one of the world's most famous manufacturers. But while the legendary Land Rover Defender has evolved constantly since making its debut in 1948, even its staunchest fans won't deny it has some catching up to do.

And that's exactly what's set to happen. After introducing the Range Rover Sport, revising the Range Rover and replacing the Freelander, Land Rover is about to drag the Defender into the 21st century with a new model that looks and feels the same, but features a total of 700 changes.

To be honest, most of these alterations aren't initially obvious, but as you approach the Defender's unmistakable silhouette, a couple of tell-tale clues reveal where the effort has gone. Most obvious is the subtle bonnet bulge required to accommodate the new 2.4-litre diesel engine. The four-cylinder unit is shared with the Ford Transit and replaces the Td5 that has powered the Defender since 1998.

Another giveaway is the absence of working ventilation slats beneath the windscreen. This apparently minor omission signifies one of the biggest changes - a major redesign of the dash and all the ventilation controls.

Climb behind the wheel and the driving position will be familiar to any Land Rover veteran, but the reprofiled door-top still isn't enough to prevent you from bashing your elbow. The one-piece facia looks good, though, and along with improved door seals helps to reduce the amount of noise in the cabin. The revised instruments are easier to read, while in the rear, new forward-facing seats are adapted from those in the third row of the old Discovery to boost passenger comfort.

On the road, the gearbox is more positive than before, despite its long throw, and while the new engine's power output only matches that of the old Td5, its 360Nm of torque represents a 20 per cent improvement, which aids responses. A higher sixth gear makes motorway cruising reason-ably quiet, too; the Defender still isn't what you'd call refined, but it's possible to conduct a conversation without the need to raise voices.

The lower first gear helps to boost off-road and towing performance, and along with the low-range transfer box, hi-tech luxuries such as anti-lock brakes and optional traction control make for supreme rugged ability. The traditionally short front and rear overhangs and wading depth of 500mm combine to ensure the Defender is an awesome performer in the rough stuff.

Few cars give their drivers such an invincible feeling, but the revised Land Rover continues to go just about anywhere you point it. The fact it now does so more quietly, with a modern ventilation system and better performance, adds polish to an already charming package. Even with prices rising £400 on average, it's been worth the wait!