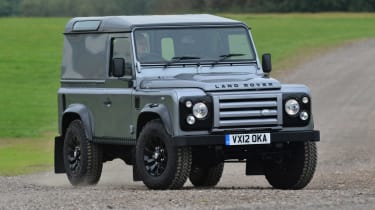 The Defender XTech looks the part, with its black alloys and distinctive paintjob, but it doesn’t take long to get tired of driving it on the road. Vague steering, ineffective brakes and body roll make it a chore in town. This Defender is a workhorse that excels at one thing – off-roading – which is why the XTech’s trendy makeover feels a bit confused.

The Land Rover Defender is one of the oldest designs on the road (and due for replacement in 2015) but that hasn't stopped the British carmaker tweaking it around the edges. This XTech special adds a further degree of cool to the iconic car.

It gets loads of extra kit and a price hike to boot, but the engine, suspension and brakes remain unchanged. The result is a Land Rover with an intriguing blend of style and unbeatable off-road ability.

Our test car had a striking Orkney Grey paint job, with 16-inch gloss-black, Saw-Tooth alloys and special MTR off-road tyres. Nara Bronze is the only other colour option, but both get contrasting black wheelarches, roof, and headlight surrounds, with a set of clear LED lights at the rear to complete the look.

There is no denying the Xtech's presence – the classic design matched to the modern trimmings make the Defender more desirable than ever. But practicality is limited.

The short-wheelbase 90 we drove is only available as a Hard-Top commercial-vehicle version, so there are no seats in the back. If you want to carry more than a couple of people, you’ll need the long-wheelbase 110, which seats seven and costs £32,995.

Inside, the XTech gains half-leather heated seats, air-con and electric windows over the basic Defender. It also gets a heated screen and a body-coloured dash insert. It makes the XTech feel positively luxurious compared with Land Rovers of old, but the upright dash and general build quality give away its age.

Unfortunately, nothing has been done to improve the car’s on-road manners. The Defender wallows around in corners and the clutch is too heavy. The steering is vague and using the brakes requires plenty of forward planning. Although unrefined, the 2.2-litre diesel is the highlight of the car, with 120bhp and 360Nm of torque providing plenty of acceleration.